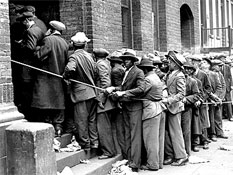 US job losses in 2008 reached the highest level since the end of World War II, an upcoming Labor Department report is expected to reveal.

Payrolls fell 500,000 in December, bringing last year’s total job losses to 2.4 million, the highest since 1945, according to a poll of analysts surveyed by Bloomberg.

The Labor Department figures, due this week, are also expected to show the unemployment rate rising to its highest level since 1993.

The jobless rate climbed to 7% in December, from 6.7% the previous month.

President-elect Barack Obama warned on Saturday of ‘double-digit unemployment’ should a ‘swift action’ not be taken to tackle the financial crisis.

The United States is plunging deeper into recession, with unemployment filings reaching a 26-year high in December and the manufacturing activity diving to a 28-year low.

Obama, who takes office January 20th, is pushing a comprehensive recovery plan that includes the creation of 3 million new jobs, a stimulus package that is worth up to $1 trillion.

2006-2015 Median Weekly Earnings of Full-Time Workers in the United States
Let’s Get Social
Feel like getting in touch or staying up to date with our latest news and updates?
Related Posts
Latest In Work Relationships