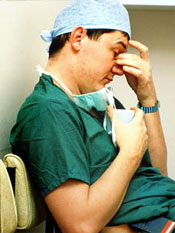 Health insurer Cigna, “a business of caring,” cares enough about its employees to cut 1,100 jobs, or about 4% of its workforce, and consolidate certain operations as it responds to the economic meltdown.

The company expects to record after-tax restructuring charges of $30 million to $40 million in Q4 2008.

Health insurers are suffering from falling enrollment as employers cut staffing, investment losses and worries about their balance sheets.

The Cigna news follows a similar announcement last month from health insurer Aetna, which said it would cut 1,000 jobs, or about 3% of its workforce by the end of 2008.

UnitedHealth Group, the largest US health insurer, said in July it was cutting some 4,000 jobs, or about 5% of its workforce, over the course of a year.

Cigna said it expects the job cuts to be completed by mid-year 2009.

The company’s shares rose 2% to close at $18.15 on the New York Stock Exchange before the job cuts were announced.