Home  » Is The Employee Free Choice Act Even Necessary? 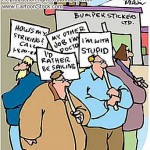 The Employee Free Choice Act, which is now making its way through Congress, is cause for concern among many employer groups. Sen. John McCain calls it a threat to small business and democracy, while supporters of the act claim it creates a fairer playing field between workers and employers. President-elect Barack Obama says the bill will help working Americans utilize their rights to organize under a fair and free process.

The act is an amendment to current labor relations law that states an employer must recognize a bargaining representative for its employees, without a secret ballot election, as long as 50 percent of the employees sign a card requesting that the employer recognize the representative.


The act is surrounded by heated debate in Virginia, as the state carriers a particularly colorful labor history. Some are saying that the act will have very little effect on Virginia’s smaller and medium sized companies. Those nay sayers believe that there are many different factors that facilitate and aid workforce organization and that it is not likely that this act will create large increases in union membership.

Unions currently represent 12.1% of the U.S.’s workforce, which is down from almost 30 percent in 1960. In 2007, only 3.7% of Virginian wage and salary workers belonged to a union, making union membership in Virginia much lower than national figures.

Keep up with the latest in employee relations at Employment Crossing.

The Bright Side of Unemployment
Let’s Get Social
Feel like getting in touch or staying up to date with our latest news and updates?
Related Posts
Latest In Work Relationships