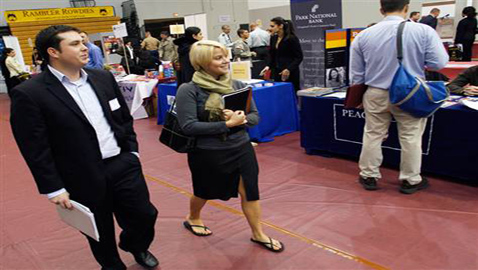 Not too many years ago, youngsters were vocally expressing their desire to come out from under their parent’s wings and build their own lives, away from their parental shadows and create a world of their own.  However, today the story is different and human resource experts are saying that they notice a change and are seeing the youth of today much more open-minded and forbearing and even encouraging — of parental participation.

Parents are actively participating in their children’s job hunts. Given their propensity to hover around everything their child does, they have been christened “Helicopter parents,” by HR professionals.

When the kids were small the helicopter parents would be all over their kids in school, during sports, extra-curricular activities and are spilling on to their workplaces as well. You will find them, submitting resumes on behalf of their kids; accompanying them to interviews and negotiating salaries on their behalf. HR professionals even relate stories of how you find them intervening in disputes.

Is this a new phenomenon and limited to over-involved, over-jealous parents? Or is it a sign of a new tolerance in a young person’s transition from childhood to adulthood? It may be wrong to assume an answer but employers are seeking answers to it.

JoAnn Corley, an employee training and development specialist, author, and coach said that she is often asked this question during seminars and says that at times parents go a bit too far. “When do you cut the umbilical cord? That’s what I want to know.”

Corley says that over-protective parents extend their kids transition to adulthood by a few years and curtail their growth and ability to think for themselves. By interfering in their work process the children are “not allowed to develop professional muscles because the parents are doing it for them,” she said.

She says that most parents are unaware of the negative impact their unwarranted support and concern is having on their kids and HR needs to tell them where and why they are going wrong and that they should create a professional boundary that they must not cross.

“If there’s not a cutting of the umbilical cord, all of a sudden that person becomes a very dependent, entitled employee, not empowered,” she says. “We want our kids to be empowered professionals. Where does that start?”

In a challenging marketplace the independent kids will learn how to take the tough knocks and become hard-wearing and resilient. Those who seek or are given parental assistance will run to their parents whenever any problem arises and, “whine and complain.”

Megan Huffnagle, a human resources manager, says that during her course of duty she has faced numerous cases of parental meddling and nosiness. She had to deal with the mother of a 20-year old who called to negotiate her son’s salary. Parents would be regulars at disciplinary meetings complaining about happenings at the workplace.

She said that parental protection went overboard, when she had a father discussing a paycheck problem for his daughter who was in her thirties. Parents coming to interviews with applicants were normal, “When one such applicant was called back, his mother cornered the interviewer and promptly gave him a list of reasons why he should hire her son,” she recollected.

Huffnagle says she was not averse to parents coming to disciplinary meetings. Many employees were young and first-timers and this helped in learning life skills such as “coming to work on time, proper grooming standards, how to work in a team environment, how to follow direction, how to respond to coaching.” However, she said that parents should also respect when they are subjected to “the same amount of professionalism and respect we do for any adult or seasoned employee.”

She said that she always made sure that the parents were coming with the knowledge and assent of the children and when parents sought permission to attend meetings, she would always ask the children if it was okay with them that their parents attended the meetings.

However, parents would be shocked when they came to know that their offspring’s approval had been sought, eviddence that they still considered it insignificant and inconsequential that their child’s opinion mattered.

Most HR professionals do not take a liking for parental intrusion and want that the young employee should fend for himself.  However, parental involvement does have its finer points. Parents can be very influential in helping their kids in deciding which job is good for them and can also play a calming influence in a volatile job market.

Companies knowing that young job candidates are likely to seek parental advice, reach out to parents, sending them recruitment literature and asking them to come to their job fairs, to see if the environment is right for their children’s professional careers.

Professors from West Virginia University researched about parental involvement in their children job hunts. In the study they concluded that it may make sense to involve parents but wrote that employers express concerns about employees who are too dependent on parental support and guidance.

The study said that the employers were worried that in the ‘hypercompetitive customer-oriented markets’ employee should be able to think on their feet and have the ability to take decisions, at times without even consulting their immediate supervisors, leave alone their parents. Over-protectiveness may make them less decisive and curtail their “ability to cope in such an environment.”

The researchers also found employers who expressed contrary feelings who said that they saw reason that such job applicants “have had strong support from their families as they grew up and are therefore well adjusted, have attended the best schools, and thus are the best job candidates.”

HR professional say that parents should realise that they won’t be around forever to decide on behalf of their kids. In order to learn decision making and other workplace skills they need to be left alone. They need to think by themselves, manage conflicts on their own and find their own way around obstacles, all this will take practice and that will come from experience.

One understands the parents concern and no one would like their children to mess up or create a bad first impression. But parents need to remember that as much as they may feel it is their moral duty to help their children accomplish something, their hovering around them could hinder their independence and capability. At times it pays to get out of the way.

Want to Be a Great Leader? Learn to Listen
Let’s Get Social
Feel like getting in touch or staying up to date with our latest news and updates?
Related Posts
Latest In Work Relationships