Home  » Going Up? That May Depend on Which Co-Workers are Taking the Elevator 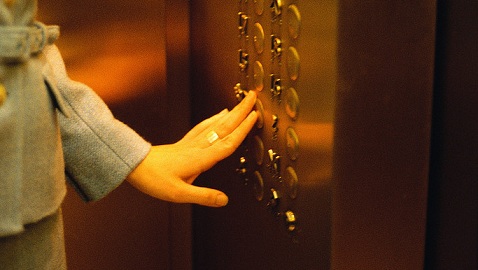 Some people’s workplace is in a building high enough that an elevator ride is a necessity. Time on the elevator generally consists of people all facing the doors, keeping to themselves and staying quiet. But according to the results of a CareerBuilder study, recently posted on the company’s website, quite a number of employees have had strange encounters sharing the office elevator with other people.

One example is the “pantsing” of a co-worker – for the uninitiated, it’s simply pulling down a person’s pants. Other workers have passed the time in an elevator changing a baby’s diaper, flossing their teeth or clipping their fingernails. Employees who participated in the survey even reported fist fighting taking place in the office elevator, while at least one worker had the pleasant experience of another employee showing a rash and asking for a diagnosis. Still others have successfully irritated their co-workers by moving the entire contents of an employee’s office into the elevator, including the desk; a woman literally using her head – to keep the doors from closing, since her arms were full of papers; and the always popular dancing throughout the ride.

CareerBuilder’s study asked employees to identify the “most annoying elevator habits” that have been witnessed at the office. Coming in at the top spot, at 35 percent, was people talking on a cell phone. Thirty-three percent cited co-workers not holding the door open when people are sprinting towards the elevator – not a surprising statistic, seeing as 16 percent of employees admitted to intentionally closing the elevator doors when spotting someone approaching.

About a third of workers surveyed, at 32 percent, pointed to some people’s habit of standing too close to others when there’s plenty of room to move around in the elevator. The same number of survey participants also cited people squeezing themselves into a clearly overcrowded elevator, while 27 percent complained of those who refuse to step off the elevator to let other people out.

What’s worse than purposefully closing the elevator doors? How about holding the doors open for a long time while waiting for someone else to get on – a grievance from 26 percent. Or cutting in line to get on the elevator when other workers having been standing there longer (23%). Twenty percent believe that people should take the stairs – and avoid the elevator – if their office is only one or two floors up; 17 percent were annoyed by employees pushing the wrong button and creating more stops along the way; and seven percent were bothered by workers who face away from the elevator doors in lieu of facing them like their fellow riders.

A number of employees in the study even noted elevator rides as a source of anxiety. Sixteen percent of them confessed that they fear being stuck in the elevator due to a malfunction – a reasonable dread, considering the types of people that often join them on the elevator.

The survey was conducted online within the U.S. by Harris Interactive on behalf of CareerBuilder. It was held between May 14 and June 4, 2012, and included 3,892 U.S. workers, ages 18 and over, all employed full-time, not self-employed and not government workers. Some percentages were based on a subset, based on responses to certain questions.

Going Up? That May Depend on Which Co-Workers are Taking the Elevator by Harrison Barnes
Tags: employee survey, employees, study, workplace conflicts
Tweet Like Plus Pin It Share