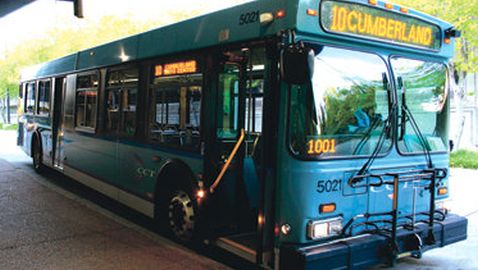 Cobb County commissioners are about to approve a contract this Tuesday that would allow for advertising on Cobb Community Transit buses, which would bring in more revenue for the county. Signal Outdoor Advertising will be permitted to sell advertisements inside and outside CCT buses for three years if final approval is granted by commissioners. The advertising agency, located in Orlando, would split its ad revenue with the county. Cobb would pull down 55 percent and Signal would pull down 45 percent.

“We don’t pay them anything; they pay us,” said Rebecca Gutowsky, Cobb’s transit manager.

For the previous 10 years, Signal has been selling ad space on the bus shelters for CCT. Cobb County did not allow ads on buses in the past but in June of 2011, the Citizen Oversight Committee made a recommendation to permit bus ads as a way to increase revenue. An approval for seeking an ad deal for the bus fleet was given in August of 2011. Fares for CCT buses increased from $2 to $2.50 for a one-way trip last year but commissioners still needed to find ways to increase revenues. Tim Lee, the County Chairman, said that some opponents did not like the idea of cluttering the clean buses.

“We’re in an economy where revenue is down, and we need to look at sources for generating revenue that we haven’t in the past,” Lee said. “That’s one of the things that made sense.”

Prior to an ad being published on a bus, the county will have to approve it. There will be no set dimensions for the ads either except for one rule; no more than 25 percent of a bus’s windows can be covered by an ad on the outside of a bus.

“Certainly, the ad content will come to me, and I will share it with (Cobb Department of Transportation Director) Faye DiMassimo, and I’m sure that Mr. (County Manager David) Hankerson will also review it,” Gutowsky said.