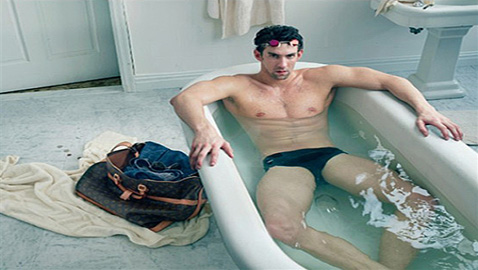 Michael Phelps may have caused a splash in the London Olympics with four gold’s and two silver medals  but a recently leaked photo, of him lying in a bathtub for a Louis Vuitton ad campaign, is threatening to cause a splash of a different kind.

Everyone involved in creating the photo deny releasing it, because it could put Phelps in deep trouble with the International Olympic Committee. A new IOC regulation, called Rule 40, prohibits athletes from appearing in ads for non-Olympic sponsors between July 18 and August 15.

Two photos of Phelps, shot by the photographer Annie Leibovitz made media rounds, during the period of prohibition. On August the 13, two days before the deadline was to elapse the Daily Mail in Britain, published two of his photos with the headline, “Let the fashion endorsements begin, Michael Phelps announced as latest face of Louis Vuitton core values campaign.”

This raises the ethical issue whether the world’s most decorated athlete has violated rule 40, that could entail monetary fines and even include stripping of medals. Rule 40, was calculated to prevent, non-Olympic sponsors from trying to associate themselves with the Olympic brand.

However, Sekou Campbell, an intellectual property attorney at Fox Rothschild has said that if the photos were leaked on purpose, “it is probably a violation of Rule 40.” “That’s the point of ambush marketing,” he said. “There’s no formal ad, but they somehow generate coverage,” he clarified.

Athletes at the games, especially those who were likely to land new endorsements, were not too happy with the imposition of Rule 40 for the London games because it prevented them from cashing in on their popularity when they were holding center stage. Many feared that unlike athletes like Phelps and Bolts, they may not be as remembered for their achievements, and greatly reduce their chances of lucrative endorsement deals.

Gold medalist Dawn Harper ridiculed the Rule, tweeting a self-portrait with a white tape covering her mouth; the words “rule 40” written on the tape.

Olympic 800 meters runner Nick Symmonds said it was a shame he could not thank his sponsors, Nike and the Orgeon Track Club, during the Olympics. “It’s about being able to give them a return on their investment.”

Symmonds agent Chris Layne believes Rule 40 is a result of archaic thinking. But “the Olympics have changed,” and now, “It is truly a professional, commercial event from start to finish.” Neither believes that Phelps should be sanctioned, as Layne points out, “If this photo shoot were prior to Rule 40, how you can enforce that?”

However, Peter Carlisle, Phelps’ longtime agent, said that this was a non-issue as Phelps had not authorized use of the photos. Moreover, it would open a Pandora’s Box, if what Carlisle says is true that there are dozens of unauthorized uses involving most of the top athletes during any Olympics.