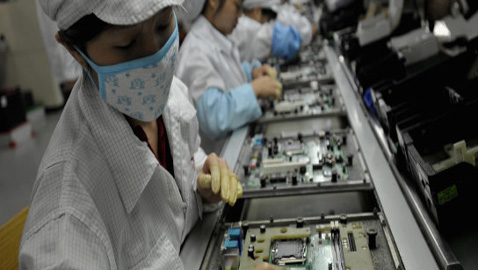 Most of Apple Inc gadgets, especially iPads and iPhones are made by Foxconn in its Chinese factories. Unfortunately however, these factories have a very poor record of safety conditions and worker concern and Apple has often been criticized for its association with them, with human rights association in the US constantly asking them to dissociate themselves with them.

However, Apple Inc and Foxconn have shown intent and have improved work and safety conditions substantially at the Chinese factories but the auditors whom they had hired to watch and supervise the process are cautioning that the hardest parts are still to come.

Local labor laws have set a 2013 deadline for plants across Southern China, that require them to reduce working hours by almost a third for the hundreds of thousands working in Foxconn plants.

The group – of which Apple is also a part, were in the beginning of this year, found accountable for numerous violations of labor law that included extreme working hours. Stringent and sustained criticism of the company that its products were built on the backs of inhumanely treated and exploited Chinese workers, forced Apple to initiate one of the largest investigations ever conducted of a U.S. company’s operations outside America.

Apple and Foxconn, that apart from manufacturing for Apple also manufactures for Dell Inc, Sony Corp, and Hewlett-Packard Co, agreed to cut down on overtime, introduce better safety methods, increase the number of workers and upgrade their living areas.

The Fair Labor Association that the companies had appointed to monitor the commitments reported that the stated changes had been implemented and that Apple was attempting to hold its partner, arguably the world’s largest contract manufacturer, answerable – almost 50 percent of the world’s consumer electronics are made in Foxconn.

Auret van Heerden, president and CEO of the FLA, said that curtailing hours would be a challenge, as even workers may not take too kindly to potential loss of wages when hours get cut.

“A lot of workers have clearly come to Shenzhen to make as much money as they can in as short a period as they can, and overtime hours are very important in that calculation,” Van Heerden said.

There is little doubt that Chinese factories, flush with abundance of cheap and willing labor, are unwilling to match foreign company standards of working conditions. Nevertheless, companies who sought their services are willing to turn a blind eye, given the high productivity at cheap coast, with China’s efficient coastal transport and shipping infrastructure being yet another added advantage.

In US, whenever Apple events are held, protestors regularly give vent to their feelings and through sloganeering and placards; accuse the company of producing unethical products.

Apple CEO Tim Cook, Steve Jobs successor has shown his willingness to tackle this monster head-on and not sacrifice strong American ethical values at the altar of consumerism.

In a statement its spokesman Steve Dowling said, the company has spelt out a specific code-of-conduct for the factories and are happy to report, that there is continued progress in lessening disproportionate work hours throughout their supply chains.

We track working hours weekly for over 700,000 workers and currently have 97 percent compliance with the 60-hour maximum workweek specified in our code of conduct,” he said.