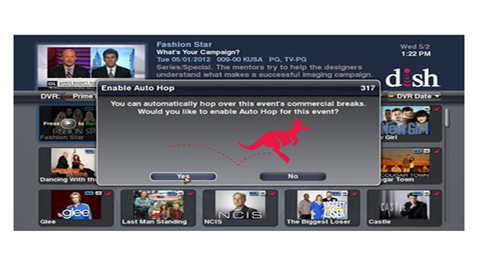 Fox Broadcasting Co, a unit of Rupert Murdoch’s News Corp. (NWSA) has requested a judge for a preliminary ban against Dish Network’s DVR feature that allows viewers to see or pass over commercials. Fox claims that failing to prohibit them; the network stands to lose revenue.

In the August filing in a Los Angeles federal court, Fox required Dish to stop offering a function that, on its own, records all prime-time shows on the four major U.S. networks and saves them for more than a week.

Dish however, refuted the contentions and said that the new features allow viewers to fast-forward commercials but they cannot delete them. It also emphasized that the feature does not change the broadcast signal.

Earlier in May other networks, amongst them CBS and NBC had sued Dish, alleging that its new AutoHop digital video- recording feature, that allows viewers the option of skipping commercials on recorded program was in violation of their copyrights and breaches Dish’s contracts.

Fox said that this service by Dish could prompt other companies to follow suit and would lead to an enormous decline in viewers for network television. Advertisers would have to do a rethink regarding their ad marketing. Lesser eyeballs could mean lower rates and in an extreme scenario, advertisers could even pull off their ads altogether.

Richard Stone, an attorney at Jenner & Block LLP, representing Fox, wrote in the filing, “PrimeTime Anytime and AutoHop cut the legs out from under the advertiser-supported broadcast television model. Fewer viewers will see the commercials during Fox programs and the amount advertisers will be willing to pay for commercials inevitably will fall.”

The networks are trying to stifle innovation, Dish said in its complaint. AutoHop “complies with Dish’s bargained-for contractual rights,” it said. Dish said it pays the networks “hundreds of millions of dollars per year in retransmission fees, collected from its subscriber base, for the right to rebroadcast these signals.”

In its filing Fox cited that in May 25 report, Neil Begley an analyst for Moody’s Investors Service had said that Dish’s new features could seriously impact the television networks’ capability to borrow money. AutoHop could have “broad negative credit implications across the television industry,” he had then said.

Dish has maintained that it is in the right and not in violation of any contracts or regulations. Moreover, it says that its feature Hopper is not “automatic” but allows the viewer to make his own choices.

The moment it got a whiff that some network were planning to sue it, it outpaced them by a mere half-an-hour filing a suit before them, which resulted in a New York federal judge issuing preliminary orders that prevent Fox from pursuing its lawsuit, until Dish’s lawsuit is heard.

Dish in its complaint has said that it is doing no wrong and that the networks are trying to suppress technological advances. It says it is complying with its bargained-for contractual rights and pays the networks “hundreds of millions of dollars per year in retransmission fees, collected from its subscriber base, for the right to rebroadcast these signals.”

A Dish Network spokesman said: “DISH believes consumers have the right to control their television-viewing experience. We’re disappointed at Fox’s continued fight against that right.”