Home  » People With Money To Burn And Sarcasm To Spare, Put Up Luscious But Provocative Anti-Obama Billboards 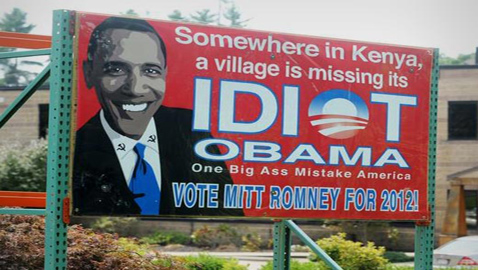 A small town Hanson in Massachusetts is making big news, stirring up unwholesome controversy, owing to two big anti-Obama hoardings that have evoked stringent criticism and emotions from people in the area.

One sign shows, a pouting little girl giving the finger to President Obama for his alleged monetary irresponsibility. It sarcastically thanks the President alleging, “You’ve spent my lunch money, my allowance, my inheritance, 35 years of my future paychecks and my retirement. You Jerk.” It then concludes asking voters to vote for Mitt Romney.

The second sign shows a smiling President Obama with a slogan “Somewhere in Kenya a village is missing its idiot. Obama One Big Ass Mistake America, Vote Mitt Romney for 2012!”

Most have not taken well to the signs and have called them crass and despicable. ‘Offensive’ and ‘insensitive’ are other words that are making the rounds.

U.S. Sen. Scott Brown said that the signs were “inappropriate” and “over-the-top” as the ethics and morality of such ads led to a vociferous debate.

“This type of inappropriate and over-the-top rhetoric does not belong in our political discourse. We should be able to disagree without being disagreeable or disrespectful,” said Alleigh Marré, press secretary for Brown.

Eric Folsom, a father from a neighboring town of Hanson, says that he would find it hard to answer his 6-year-old daughter if “If she saw that, she’d say ‘Why is that little girl doing that? What does that mean? How do I explain that?”

The signs were put up by Robert Sullivan, owner of a motorcycle shop. However, he overlooked seeking permission to install them and is now in violation of general bylaws. Sullivan must file appropriate paperwork soon or risk being taken to court over the placement of the signs.

Such anti-Obama billboards have been making their appearance rather frequently and these two come close on the heels of the one earlier this month that compared Obama to Osama bin Laden. It read, “The Navy SEALS removed one threat to America. The voters must remove the other.”

Moreover, the police have received upwards of 40 calls from motorists who are saying that the signs placement is a distraction to them and could cause accidents.

Even though some said that it was matter of free speech and the signs were funny, most found it offensive and in poor taste. James Brown, a resident of Brockton said that the signs were ‘racist and ridiculous’ and that the country ‘needs to grow up.’

A teacher by profession he said he was surprised how somebody could approve such an ad. If you want to canvass for Mitt Romney project his strengths and not go belittling Obama. This he said is ‘regressive and not progressive.’

Another justifiable criticism is that asking the child featured in the billboard to make that obscene gesture is exploitative and insensitive.

Even though the Obama camp is saying that the ads are distasteful, they will do well to remember that their own camp has ridiculed and mocked Romney from “strapping a crate containing the family dog to the roof of his car to his wife’s owning a horse that competed in the Olympics, to him being responsible for the death of a worker’s wife”

Strangely, these ads could actually be positive for Obama and add fuel to the argument that Obama has been the most vilified US President and target of mean-spirited attacks. He will garner sympathy which will translate into votes.