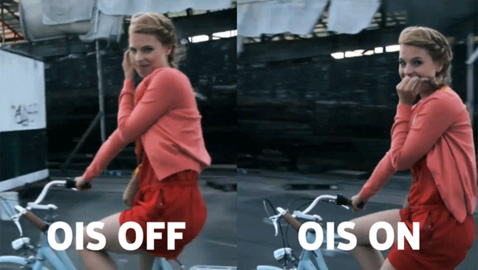 Nokia’s touting of Lumia 920 as one of its premier smartphones has had a rather inauspicious start to its debut campaign, based at it is on fraudulent assertions.

The company claims that the Lumia 920 is an unbelievably stable built-in camera that eliminated blurry images, caught moving images without distorting them and stabilized pictures taken with shaky hands.

The company unveiled a video, to promote the fancy gizmo which showed an eye-catching couple riding cycles along a dock. The curly-haired boy is holding on to his bicycle handlebars with one hand and the phone in the other, recording the attractive girl, attired in a red dress with his Lumia 920.

The video then shows, what they attempt to pass off as footage taken by the Nokia smartphone and compare it with shaky footage captured without Nokia’s Optical Image Stabilization (OIS). Unsurprisingly the non-stabilized version looks wobbly and hazy whilst the one purportedly taken by the Nokia camera is flawlessly smooth and clear.

However, keen eyed bloggers noticed that the company had faked the video that shows off the image stabilizer. The ‘caught-you’ bloggers saw that as the couple was passing a parked car, they caught the reflection in the window a reflection of a cameraman, in a white van, using a professional camera to record the footage that was eventually shown.

Being caught on the wrong foot and on tape the company allowed better sense to prevail and instead of trying to defend the indefensible, accepted that they had faked the evidence.

Nokia spokeswoman Heidi Lemmetyinen wrote: “In an effort to demonstrate the benefits of optical image stabilization (which eliminates blurry images and improves pictures shot in low light conditions), we produced a video that simulates what we will be able to deliver with OIS.”

“We should have posted a disclaimer stating this was a representation of OIS only. This was not shot with a Lumia 920,” she admitted. “We apologize for the confusion we created.”

Inspite of the dishonest presentation of its technology it is quite possible that the Lumia 920 does exactly what, or at least part of what the company proclaims it can do. Optical stabilization is a proven technology that has been tried and tested on conventional cameras. But with their trust slightly dented users will find it hard to take them at face value.

Nokia, once the undisputed leader in mobile phones, has been outpaced by Apple and Google, whose smartphones powered by iOS and Android operating systems find more favor with the consumers. This recent gaffe will do little to put them on the road to recovery.

Business ethics group say that it is good that Nokia has realized the seriousness of the matter and apologized. There is an element of trust and the company would do well not to betray that. It does not matter whether the deception was intentional or an oversight, Nokia has let itself down and it has taken the shine off the launch. The product will need, more than ever, to speak for itself.

Nokia spokesperson said that they were looking forward to market the new gadget in select markets later this year. They said they have posted a new video that shows footage shot by the new phone. Are you sure Nokia? After the trickery, viewers may be forgiven for being skeptical and disbelieving.