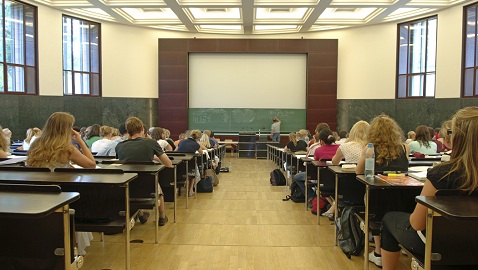 A tenured professor at Northeastern Illinois University sought an injunction against future retaliation from the university president and a senior administrator, or provost. She believed that her First Amendment rights had been violated after she had given a speech critical of the college.

The speech in question was made to the Illinois Legislative Latino Caucus, where she criticized the university not hiring more Latino faculty and spending more money on administrators than faculty. Months prior to that, the professor joined two students, part of the Anti-War Club, in protesting the presence of military recruiters at a job fair on campus. A similar event took place after the woman’s speech, when students protested CIA recruiters and two of the students were arrested. The professor was not a part of the protest but did support the students, who belonged to a club that the woman advised, by visiting campus police and complaining to administrators.

At a faculty meeting, the woman spoke on the students’ arrests, and the VP of student affairs allegedly blamed the students and the professor in the capacity of advisor. The VP, who has since retired, also referenced stalking charges against the professor – a student complaint that was eventually amended to name another student. The woman complained, and an investigation determined that the VP had acted “inappropriately.”

Two other notable incidents were the denial of an award and not being made a department head. The provost did not override the denial of a Faculty Excellence Award because the professor’s book hadn’t yet been published, though he’d done so for another professor. When the Justice Studies – the woman’s field – was being made into an independent department, the faculty, in a majority vote, selected the professor. The provost, however, had the final say and did not believe that the woman was “competent.”

Her federal claims included the injunction and a demand to be appointed chair, but she dropped the demand in response to the defendants’ motion for summary judgment. The district court granted that motion and declined to exercise jurisdiction on the plaintiff’s various state-law claims, such as defamation.

On appeal, the defendants argued that forgoing her demand for chair effectively ended the case, but judges looked for merit in her injunction against imminent retaliation. One point of argument from the plaintiff was a policy that was proposed by the president – a policy on campus demonstrations that, in part, would prohibit disturbances. But judges considered the policy, regarding the potential for retaliation, as “conjectural” – it had been criticized and withdrawn, and there was no indication that the policy would go into effect or remain unchanged if it were ever passed.

And that’s how appellate judges viewed the case overall – as mere conjecture. There seemed to be no pattern of retaliatory action from the provost or president, so it couldn’t be determined whether or not any alleged action would continue. They saw the professor’s claims as “serious” but concluded that the legal action was premature and that the woman, if necessary, may return to her claims later. The district court’s decision was vacated and remanded to dismiss the federal claims as “unripe,” and the dismissal of the state-law claims was affirmed.

University Professor Seeks Injunction Against Retaliation from President and Administrator by Harrison Barnes
Tags: injunction, lawsuit, retaliation, university, us court of appeals
Tweet Like Plus Pin It Share

Fake FMLA Requests Can Be Overcome
Let’s Get Social
Feel like getting in touch or staying up to date with our latest news and updates?
Related Posts
Latest In Work Relationships