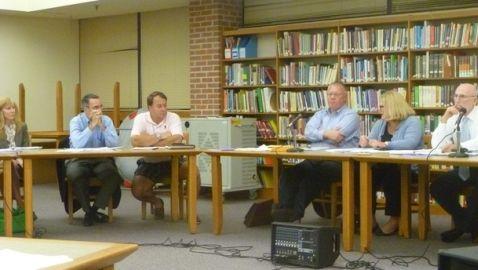 Board members for Region 9 are currently indecisive over whether they should allow commercial advertising to be displayed on the athletic fields for Joel Barlow High School. Some board members feel as though it is a great idea while others are against it. The discussion on the possibility of advertising on the fields came up at a board meeting several days ago, back on September 12th. Back in August, the State Representative, John Shaban, asked for permission to have certain logos and donor signs displayed on the different municipal fields, which would include the fields at Joel Barlow High School. Shaban made it clear that allowing these signs to be displayed, money would be generated and that the money they were able to gain from the advertising could be used to help resurface the stadium field at the high school.

Just a few months ago, back in May, an update was added to the regulations that would allow these kinds of signs to be displayed. However, the update of the regulations was only for the second Redding Community Center Athletic Field. The regulation said, “Badges or insignias can include permanent corporate logos placed horizontally within the artificial playing surface in recognition of charitable contributions to the completion of this field with independent funding.”

An original proposal was supposed to be set for a hearing on August 8th but Shaban chose to withdraw his application because the board chair for Region 9, Cathy Gombos, was asking the board to talk about the amendment further. One board member, Leon Karvelis, is opposed to having advertisements featured on the fields. He says, “We are a public facility supported by taxpayers. If our field started to look like Citi Field it does not appeal to me. I’d be against that. We can raise money through boosters and activities.” Karvelis believes that brick pavers with the names of different donors were a better idea than having advertisements all over the fields.

A separate board member, Joseph Macchio, said, “I’m for it but in a limited fashion.” A third board member, Vance Hancock, believes that if the board starts being open to advertising, problems are going to arise. Hancock said, “How do we regulate it? We’re heading down a slippery slope and it’ll be hard to control.” Mark Lewis, the vice chair, said the general purpose of Barlow is to educate the students, not advertise. He said, “Advertisements are to sell a product, not to fund fields. Students in an educational setting should not be subjected to advertising at any time. The community field is different. People choose to go there. Our field is for physical education purposes, and students are required to go.”