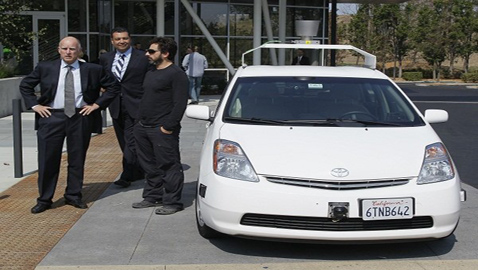 In what might prove to be a knotty problem for officers used to ticketing humans, on Tuesday, California Gov. Jerry Brown signed into law SB1298, which would make ‘autonomous’ vehicles legal in California. The law also requires the Department of Motor Vehicles to create and enforce safety regulations for the manufacture of such vehicles. The Governor signed the bill at Google’s headquarters in Mountain View, where Google has been testing driverless versions of the Toyota Prius for many years.

Brown said, “Today, we’re looking at science fiction becoming tomorrow’s reality … This self-driving car is another step forward in this long march of California pioneering the future and leading not just the country, but the whole world.”

Anyway, the question of whom to charge for rash driving aside, the law, which comes into immediate effect and allows testing of driverless vehicles on public roadways, requires properly licensed drivers seated at the wheel and ready to take over in case of failure of the artificial intelligence.

However, the chance to own a driverless vehicle may still be far off as the new law allows such vehicles to initiate testing on public highways with immediate effect, but the Department of Motor Vehicles has been given leeway to come up with proper regulations and enforcement systems by January 2015.

Even though safety concern is one of the primary issues involved in the launch of driverless vehicles on roads, Google, which is lobbying for such vehicles, and state Sen. Alex Padilla, who introduced the bill, claim that autonomous vehicles, would in fact, greatly improve public safety.

Sergey Brin, Google co-founder says, “It really has the power to change people’s lives” as they would provide greater mobility to people with disabilities, and also reduce wastage of time and fuel.

E-Cigarette Ads Increasing in Number and Effectiveness
Let’s Get Social
Feel like getting in touch or staying up to date with our latest news and updates?
Related Posts
Latest In Work Relationships