Home  » Nike Campaign Says, Today’s Youth Could Be The First Generation In History Not To Outlive Its Parents’ Generation 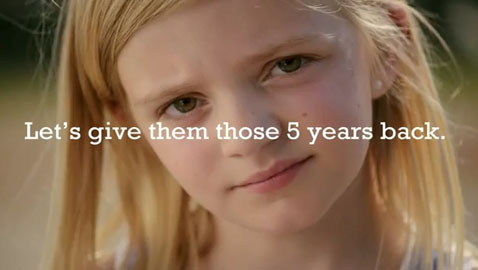 Even though overall life expectancy has increased it is a sobering thought that today’s youth are the first ever to have a shorter life-expectancy than their parents and grandparents.

Nike has ushered in a study and a movement, named “Designed to Move” to apprise the world of the health of our children and what the future holds for them if we do not act.

In an emotive, supremely powerful, almost two minute long YouTube video, we see and hear many children telling what they would do if God gave them an addition five years to live. One says that he’d probably invent a time machine; a cute child expresses his concern for the sick and says he’d make medicines, another be happy to just add to his hamster collection and one would like to be a sporting hero. The answers are spontaneous, honest, and straight from the heart.

There is no ambiguity in the message. It tells that the possibilities are endless. The children must not be denied their chance and that it is our duty to ensure that their lives are not cut short because we did not care enough.

Nike tweets,   “We are designed to move. Standing still is only moving us backwards. It’s time for action.”

A report from Nike and others who have collaborated on the movement says that almost one third of today’s children are obese and that over almost the last half a century, physical activity amongst children has gone down drastically.

The report emphasizes the alarming situation saying that if nothing is done now half of the Chinese and American populations will become physically inactive by 2030. In another 20 years or so, almost a billion people will be affected, says the report.

The report does not merely sound the alarm bells, it also offers solutions.  It says, we should create positive experience for the children very early in their lives and integrate physical activity into our daily lives.

What is truly great about the ad is that it is purely philanthropic. Nowhere does Nike tell us that they are behind the ad, nor is their signature symbol, “swoosh” visible anywhere. It sends a valuable message to the corporate giants, that their businesses are more than just making money that they have a moral duty to fulfill, that the community that provides them with their billions is also desperately seeking their assistance.

For Nike “Designed to Move” is a vision. Their mission was to initiate debate, discussion and action. This they have managed to do as the video has received wide acclaim and brought the issue of the current children’s generation curtailed longevity on an international meeting point.

Track star and Nike endorser Olympics gold medalist Allyson Felix, said attitudes have to change, “When you do something bad in school, you are forced to run a lap. We know that habits about physical activity form before kids are 10 years old. So we change that. We have to give kids more positive experiences of physical activity, “he said.

Nike Campaign Says, Today’s Youth Could Be The First Generation In History Not To Outlive Its Parents' Generation by Harrison Barnes
Tweet Like Plus Pin It Share