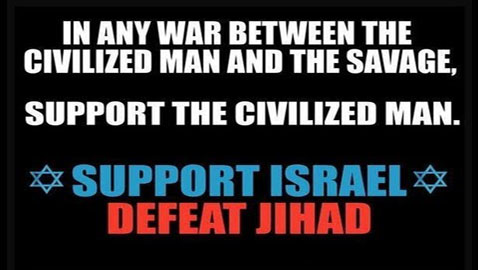 Pamela Geller’s anti-jihad advertisements that compare Muslim fundamentalists with savages have attracted considerable attention with a wide section of the people saying that it was time someone told them on their faces what the world really thinks of them, but are afraid to say so.

On the other hand there are others who say that to generalize Muslims in such an offensive manner bespeaks of a supercilious attitude and only helps ignite passions.

However, the religious war is taking a new, rather interesting turn. Two faith groups, on the opposite side of the religious spectrum are joining hands urging tolerance and forbearance towards Muslims.

The two groups, ‘Rabbis for Human Rights, North America,’ and the Christian group ‘Sojourners,’ will hang ads alongside Pamela Geller’s ads in the 10 Manhattan subway stations where the anti-jihad ads are exhibited. Spokespersons for the groups said that the ads will go up on Monday.

‘Sojourners’ is led by Jim Wallis, a progressive pastor whose advise is even sought by President Barack Obama and who is known for his advocacy of liberal values.

The rabbis’ ad says: “In the choice between love and hate, choose love. Help stop bigotry against our Muslim neighbors.”

Rabbi Jill Jacobs, executive director of Rabbis for Human Rights clarified that the ads are in response to Geller’s ads and the intent is to let everyone know that those views are her own and she is not speaking on behalf of the entire Jewish community.

We are a group of 1,800 rabbis and we want everyone to know that we have to work in partnership with the Muslim community and do not believe in dehumanizing them,” she said.

The Sojourner’s ad simply says: “Love your Muslim neighbors.” Reverend Beau Underwood, the groups manager said, for Christians loving one another, especially your neighbor is at the heart of their faith and that we should treat others the way you would want to be treated. “An essential tenet of Christianity is to love our neighbors,” he said.

Another group, ‘United Methodist Women’ echoed similar feelings and put up pro-Muslim ads, reading “Hate speech is not civilized” in the subway.

Pamela Geller, whose ‘The American Freedom Defense Initiative’ is behind the hate-ads, has been in the news for her protracted and complex battle with the MTA, which had refused her permission to put up the ads in the city’s subway, train and bus systems that it owns and runs. However, a judge ruled in Geller’s favor and allowed her to post them in the subways. She is still awaiting permission to post them in trains and buses.

The faith groups say that the people must not allow the city’s subways and buses to become platforms of hate ‘that divide friends, neighbors, and colleagues.’ Let us all join hands to condemn the hate spreaders, they say. In a petition they warned, “These disturbing and misguided ads are not meant to educate; they are meant to increase hatred and discrimination against New York City’s Muslims, and to drive a wedge between Muslims and Jews.”