Home  » Is It The Job Of Restaurateurs To Feed People Or To Titillate Them? Woman Denied Job As She Couldn’t Fit Into Skimpy Dress 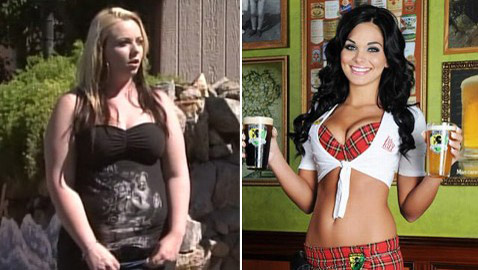 One would assume that the attributes for being an efficient food server would be promptness, courtesy, a smiling demenour but it seems that being shapely and attractive supersede these skills, and are what restaurateurs are really looking for in those that they are hiring.

20-year old Jennifer Rogers has alleged that she was refused a job, at the Tilted Kilt Pub and Eatery in Palm Desert, Calif., when she would not fit into the eatery’s mandated uniform.

The Arizona based chain says that applicants for their waitresses jobs must meet established guidelines and that they are entertainers first and servers second.” The company has a specific unhidden dress code that openly asks for applicants to “maintain a costume fit, as detailed in the appearance guidelines.”

Rogers however said, that she was just looking for a job and her appearance or body-shape should not determine whether she got it or not. “Why should anyone have to look a certain way to work at a different place? It’s not fair,” she surmised.

The company said that its hiring rules were in consonance with state and federal laws and that the company “specifically hires females for the role of the Kilt Girl who fit our profile, which includes being attractive, intelligent and having outgoing personalities.”

The eatery says that it has an image to live up to and its waitresses, entertainers as they call them, have to wear a “matching tartan bra, revealing white shirt and knee-high socks.” Moreover, the statement went on to say, that the costumes came in three varying sizes, to ensure that they fit the body-shapes of most applicants.

Federal laws forbid workplaces from being selective in their hiring and oppose employment discrimination on the basis of community, color, faith, sex or nationality, but strangely, say nothing about body type.

The eatery is re-opening after being closed for around 18 months and received a very good response to its calls to find “Kilt Girls.”

Bryan VanderMeer, General Manager said “I have been definitely surprised; we’ve had a great turnout. We’ve had a lot more people than I expected who actually fill the requirements of this position, and we are really excited to bring them to the valley and show the valley what we have.”

Other waitresses at the restaurant were not to perturbed about the fuss that has been generated and not only wore the skimpy uniforms willingly but also participate in the monthly kilt girl competition that sees them wearing a bikini and talking about their hobbies and goals and their favorite pub menu item.

Maybe if she had been turned down at the very outset, the problem would not have arisen. But that she was made to go through the application process, which incidentally she cleared and then turned away, because she could not fasten the clasp on her skimpy dress, does seem a little insensitive and unjust.

Is It The Job Of Restaurateurs To Feed People Or To Titillate Them? Woman Denied Job As She Couldn’t Fit Into Skimpy Dress by Harrison Barnes
Tweet Like Plus Pin It Share

Succeeding at Managing a Team in 14 Steps

CEO of Small Startup Lets Employees Vote for Management
Let’s Get Social
Feel like getting in touch or staying up to date with our latest news and updates?
Related Posts
Latest In Work Relationships
BCG FEATURED JOB