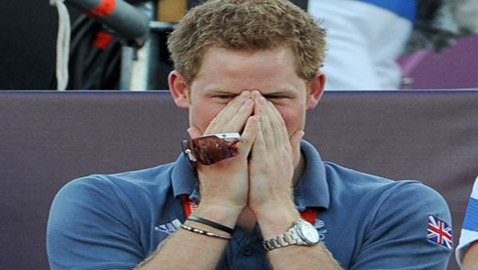 Prince Harry, it seems does not have an idea of what he is really worth. Instead of feeling outraged and embarrassed over the release of his ‘naked visage’ shots taken during a party  in his private suite at the MGM Grand hotel in Las Vegas, had he charged publishers for publishing the photographs, he would have raked in a fortune.

The Las Vegas Convention and Visitors Authority have said that the images of a naked Harry were viewed by around 154 million people, which gave tourism to Las Vegas a huge boost. Had they been billed for it, they would have to cough out $23 million.

The LVCVA Board Chairman Tom Collins said, “God bless Prince Harry. He has made us a bunch of money.”

People in Las Vegas, a city known for its lavish lifestyle feigned anger and outrage over the leaked photographs, that made their way to every nook and corner of the globe, capitalizing on the incident by creating a social media campaign, calling people who released the photos shameless and irresponsible and telling them they had broken the city’s sanctified credo, “What happens in Vegas, stays in Vegas.”

The LCVA took out a cheeky full-page ad in, USA Today, chastising those who had leaked the naked photos. It says, shame on you, all those of you who broke the code and exploited Prince Harry. We will boycott you, because what happens in Vegas stays there.

Cathy Tull, senior vice president of marketing for the LCVA said that it was important that our visitors, “Know the code,’ and most importantly, ‘Protect the code.”

Other Las Vegas companies have also cashed in on the controversy. Lynx deodorant released an ad with it body spray, atop which lay an awry crown and a tagline saying, “Sorry Harry if it had anything to do with us.”

An eatery has also cashed in on the opportunity and introduced a hugely popular $25 burger named “The Exposed Prince.” Britishers who show their passports got a 20 percent discount on the price.

Tourism to Vegas is on the rise and hotel.com reported that Las Vegas searches have doubled from last year. Company officials are calling it “’the Prince Harry effect.”

Kate Hopcraft of hotels.com said, “Vegas has long since been the party capital of the world, and it seems that recent events have led to a resurgence in people’s desire to go there and let off steam, just as Prince Harry has.”

Meanwhile the Prince has had got enough offers to take off his clothes again and this time for money. Playgirl and Chippendales are prepared to pay big bucks to him for displaying the crown jewels on their pages.

Playgirl publisher Vincent Stevens expressed doubt that the offer would be taken, but confirmed that the money will be in six figures. “He’s a wild party guy. He’s appealing to a lot of people because, although he’s from the royal family, there’s sort of this untamed nature to him.”

Chippendales said that they were interested in having the prince as their next guest host. “We figured that since he seems to enjoy taking his clothes off in Las Vegas, why not do it on stage at the No 1 Male Revue in the world.”

Even if the prince turns down all offers, however lucrative, there is little doubt that more of his photographs from that boozy night are still to see the light of the day. There are incorrigible reports of many girls taking pictures on the mobile phones and they have suddenly realized what they are worth.

The pictures may have caused the royal family huge embarrassment and discomfiture but the Las Vegas tourism officials are laughing all the way to the bank.