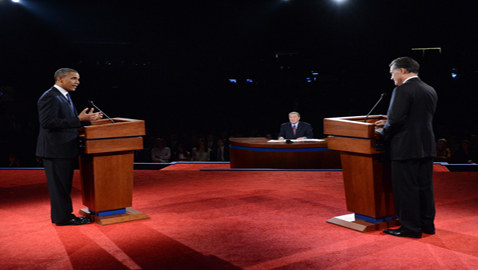 Television debates between candidates play a definitive role in raising or lowering ratings. The recent debates between Governor Mitt Romney and President Obama, as also the Vice-presidential debates between Joe Biden and Paul Ryan have belied the conviction that they do not play a major role, as by the time the debates come along the voters have already decided who they want to vote for.

Television is chock-a-bloc with political ads, with more than $2.5 billion splurged on the presidential election.  Cable news keeps a tab on every single movement that it reports 24×7, not to talk of Facebook, Twitter and YouTube. It would then be safe to assume that the voter is undecided no more – but the post-debate analyses have a different story to tell.

According to Nielsen, 67.2 million viewers watched the first debate, making it one of the most watched programs, second only to the Super Bowl. That is a huge following, its significance even more, since it saw Mitt Romney’s pole-vault 4 to 6 points in the ratings, making the race to the White House an even contest, which the poll pundits, prior to the debate, were calling a virtual walkover for President Obama.

TV debates are not what they were in the 60s or even slightly later. Then there were just three networks, compared to the upwards of 500 channels that we have now. The internet was a fledgling, finding its legs, and not the second-by-second messenger that it has now become.

The first two debates have raised hype like never before. It is not too different from the kind of hysterical buildup that was created before a Mohammed Ali boxing bout. The media believes that the next debate on Tuesday night, with a hurt Obama raring for revenge and resurgent Romney determined to consolidate his gains, will see an audience far in excess of the almost 68 million who watched the first debate.

Jeff Zucker, former chief executive of NBC Universal said, “Television is about drama, whether it is the Olympics, the Super Bowl, or ‘Homeland,’ and these debates have provided incredibly great drama. It just proves the adage that if you put on a good show, and both of these debates have been very good television, the audiences are going to be there.”

Where televised debates score over other advertising media is that it allows viewers to make a head-to-head
comparison. The President came out poorly in the first debate not because of what he said or did not say, but because his body demeanor suggested he was uninterested and chagrined. There was imperiousness in his outlook that watchers found self-righteous and demeaning.

Print and other media campaigns have experts to monitor and oversee every aspect of the process, but there is not much the candidates team can do when he is on the stage dueling. The audience decides the winner.

Which brings us to the question, why do candidates spends billions of dollars on political ads and social media outreach when the televised debates have the power to give the decisive knockout blow? Moreover, the debates don’t cost them a penny.

Alan Schroeder, a professor of journalism at Northeastern University and author of “Presidential Debates: Fifty Years of High-Risk TV   called it a rare moment when “The visual overtook the words.”

Mark Shields, the PBS analyst said, “Picking a president is a very personal thing. You want to get to know the guy.”