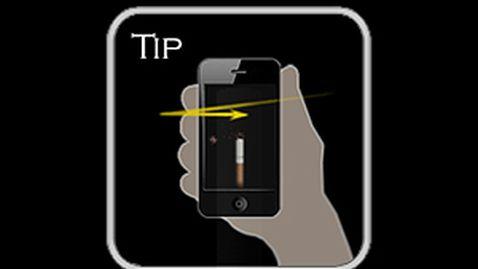 Tobacco companies have recently found a new way to target individuals for their tobacco products, specifically cigarettes. Plenty of pro-smoking advertisements, many of which feature different cigarette brand names and images, are being promoted on smartphones to a broad range of individuals, including children and teens.

A lead author for the study, Nasser Dhim, has said, “The regulation of these apps is lagging behind the legislation in Australia and many other countries which ban tobacco advertising including through the internet and virtual stores.” Dhim also said, “This is despite the fact that the Apple and Android app stores have the technological infrastructure to block the sale of apps in accordance with local laws. As we show in our study Apple has already used this technology to ban access to certain content on its app store, in both China and Saudi Arabia.”

In the study, hundreds of pro-smoking apps were identified. Many of the pro-smoking apps were found in the Apple store while several others were found in the Android app store. By the time February of 2012 rolled around, these particular applications had been downloaded by around 11 million individuals across the world. This particular figure only accounts for the number of individuals who have downloaded these apps for the Android but the number is expected to be much higher when the number of people downloading the apps from Apple is included in, especially since the Apple store is quite popular amongst people around the world.

A pro-smoking app is considered to be an application that provides information on cigarettes and tobacco, along with different brands and companies that produce these products. The app may provide information on where these brands and products can be purchased as well. There are also some smoking simulation apps that exist, which are also considered pro-smoking apps.

Dhim says, “These simulation apps include such examples as Hotsmoke, where the virtual cigarette burns faster if you inhale faster and MyAshTray which simulates an ashtray where you can drop your ash and receive message such as ‘Would be even better with a beer in your hand!’, this is because other independent studies have shown that such virtual images of cigarettes are more likely to trigger smoking craving behaviour than to help them quit.”

These particular apps can be found under a number of different categories in the Apple and Android stores. Some of the categories include health and fitness, entertainment, and lifestyle. These apps are easily available, which means that many teenagers and even children could have been exposed to them.