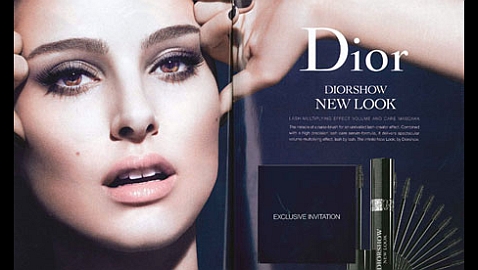 A mascara ad for Christian Dior featuring Natalie Portman, a graduate of Harvard University and famous for her Black Swan role, where she won an Academy Award, has been banned for being airbrushed.  Airbrushing involves retouching photos to take away flaws. Computer programs such as Photoshop allow endless enhancement of images. In advertising, the image a reader sees may remotely resemble the actual photo after digital manipulations.

Christian Dior came under criticism for airbrushing the image of Portman into an unrealistic portrayal of the Jerusalem-born actress in a magazine ad promoting mascara, a cosmetic used to enhance the eyes.  The photo was accompanied by a puffing statement that the make-up product delivered a “spectacular volume-multiplying effect, lash by lash,” according to the magazine ad.

Airbrushing can add things that were not in the original photo, such as a scenic background or increase the size of a female model’s physical features, such as adding more hair or a tan.  Despite Christian Dior competitor L’Oreal being a big airbrushing offender, with ads featuring Pretty Woman star Julia Roberts, theatre actress Rachel Weisz, model Christy Turlington, and Madrid-born actress Penelope Cruz banned, L’Oreal complained to the Advertising Standards Authority that the Christian Dior ad “misleadingly exaggerated the likely effects of the product,” according to theguardian.

Airbrushing is usually used to remove perceived flaws from a photo such as unwanted shadows, lines, wrinkles and cellulite.  Christian Dior responded that buyers of its products expected images used in ads for beauty to have used digital enhancement, and admitted Portman had not worn false eyelashes during the photo shoot.  Christian Dior used Photoshop to make Portman look like she wore eyelashes.

The American Medical Association has condemned airbrushing of models in advertisements, though some argue advertisements are a fantasy.  Airbrushing may create unrealistic body images.  According to theguardian news article, Christian Dior stated a “minimal” amount of retouching occurred in the magazine ad to improve the thickness and volume of a number of Portman’s real lashes. Christian Dior stated the airbrushing was to “stylistically lengthen and curve her lashes,” according to theguardian.

Though companies have pledged to be careful about producing unrealistic images in their ads, almost each advertisement employs some airbrushing. The Advertising Standards Authority said: “Because we considered that we had not seen sufficient evidence to show that the post-production retouching on Natalie Portman’s lashes in the ad did not exaggerate the likely effects of the product, we concluded the ad was likely to mislead,” according to theguardian.

Barnes & Noble Step Up Their Holiday Advertising
Let’s Get Social
Feel like getting in touch or staying up to date with our latest news and updates?
Related Posts
Latest In Work Relationships