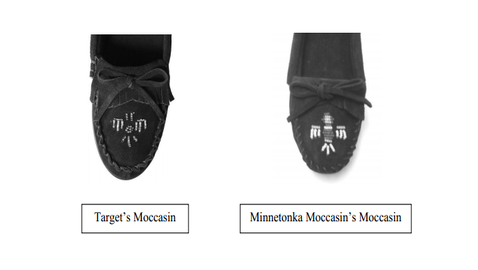 In October 2012, Minnetonka Moccasins claimed Target knocked off its moccasins.  The Minneapolis-based company sued Target for trademark infringement.  Its moccasins have been worn by the famous such as Kate Moss and Lindsay Lohan.

According to The Huffington Post, in court filings, Minnetonka alleged Target infringed its “Thunderbird” design, which the company has used on its shoe for 40 years.  The design is a tiny, beaded bird on the shoe’s toe.

Target came out with its moccasin in early 2012.  Prior to coming out with its shoe, Target allegedly approached Minnetonka with a business proposal to sell the company’s moccasins in Target stores. Target is based in Minneapolis, and allegedly offered “prime real estate on the floor” of Target stores for the moccasins made by Minnetonka, according to the lawsuit complaint.

The lawsuit is an example of how fashion designs may be easily knocked off.  Besides trademark law, companies can apply for design patents on the designs, but it may be expensive if the designs are not long-term or high volume sales. For a company like Minnetonka which uses the same design for several years, design patents may be recommended.  For short term or seasonal designs, the cost for preparing and filing a design patent application may outweigh the protection need.

Trademarks protect the look and feel of a product.  They help the consumer in preventing confusion on the company supplying or manufacturing a product.  Design patents provide similar protection as copyrights. Copyrights are traditionally for text not designs. One difference between copyrights and design patents is that the damages for patent infringements might be more.

Design patents only cover the way the item looks.  When the design is not an exact knock off, there may not be protection.  The pattern of a design is important in determining infringement.