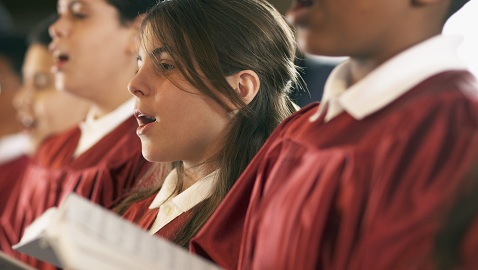 The Music Director for St. John Neumann Catholic Church in Austin, TX, was fired. He sued, claiming violations of the ADEA (Age Discrimination in Employment Act) and ADA (Americans with Disabilities Act), but the case was ultimately decided based on whether or not the church was entitled to the ministerial exception.

The man became the Music Director in 1998, overseeing the Music Department, managing the sound systems and maintaining the sound equipment and music room. He also rehearsed with members of the choir and accompanied them on piano. His family was involved with the choir, his wife handled the daily responsibilities of the music program and his daughter worked with the children’s choir.

The church received a new pastor in 2006 and shortly thereafter initiated a building campaign. The Music Director was told in 2007 that he would need to cut $60,000 from the music budget. He worked out a new budget, including cutting his own salary by $10,000. He was later asked to perform an inventory of the music department and had knee replacement surgery in June. The next month, he determined that there was mold in the music room, which he reported to the OSHA (Occupational Safety and Health Administration), and one month later, he was fired.

On appeal, judges essentially focused their review on the ministerial exception in lieu of considering the ADEA and ADA claims. The man argued that he played the piano at Mass and his duties were limited to bookwork, maintenance and custodial work – none of which had a precise correlation with religion. The church countered by noting the importance of music in its worship, deeming the person who leads the music as a vital component of Mass.

The plaintiff disputed this argument, further pointing to the fact that he no training, education or experience to cover any ministerial duties, had no direct interaction with the congregation and was not at the church during the day. He even specifically mentioned that, while at the piano, he was facing away from the congregation and out of sight of the cantors – the people who lead the congregation in singing.

But the church asserted that, since the man was fundamental in the church’s musical direction, he was considered a minister. He aided in the service and helped convey the church’s message and “carry out its mission.” The fact that the man lacked education and training, and did not conduct Mass or deliver sermons, was immaterial – the ministerial exception does not apply only to those who are ordained. The church believed that music augmented the congregation’s worship, and the plaintiff was responsible for the music and therefore helped with the services.

Seeing no reason to discredit the ministerial exception in this case, appellate judges agreed with the district court that the exemption barred the man’s lawsuit against the church. The grant of summary judgment was accordingly affirmed.

5 Ways You Can Hire and Keep the Best Employees for Your Company
Let’s Get Social
Feel like getting in touch or staying up to date with our latest news and updates?
Related Posts
Latest In Work Relationships
BCG FEATURED JOB