Home  » Families Rue They Cannot Send Their Children To Colleges Of Choice: Blame Economy For Their Woes 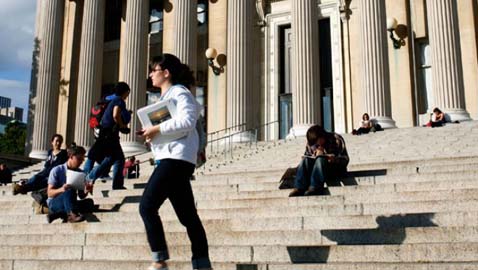 All families want to send their kids to the best educational institutions and deeply desire that they should avail of the best education possible, but are finding out to their dismay that they are unable to afford it. Expectations and realties don’t match and parents are disappointed and saddened that what the economy has done to their revenues is impacting their children so severely.

Parents say that the economic turmoil has seen at least one parent lose his job and in many cases both, at one time or the other. Subsequent jobs were either paying less than the earlier one or were part-time ones that heavily curtailed income.

Parents in order to save for children’s education, cut back on their eating-out, gave holidays a miss, led frugal austere lives, but still found they were unable to meet their kid’s college tuition bills.

Parents said they were stretching their paychecks as much as possible, even wearing second hand clothes but extra-curricular activities for their kids were now, unfortunately, history.

What hurts most is that they had started assuming that they would send their college to elite private colleges, right from the day they were born. Parents today still nurture those dreams unable to realign them with contemporary reality.

Living paycheck-to-paycheck parents moan that instead of leaving their kids some inheritance, they may leave them with accumulated debts and even have to live of their earnings in their retirement. It is a painful and sobering thought.

However, most feel and hope with the economy perking up and the unemployment rate on the decline, their children would have better opportunities than them. We can only hope and pray that they get the chance to live the American dream, they said.

Parents are pushing their children hard in school and hope that their performance merits a scholarship and they can get into colleges of choice. But then that’s not how children should be brought up and should be allowed to learn at their own pace.

On parent said that it really distresses her when she see fancy holidays ads for places like Disneyland and know that they’ll never be able to take their kids there.

Surveys have revealed that of the 60 percent of high school students who feel they will attend a graduate or professional school after college, only 10 percent do so.

A study called “Monitoring the Future,” conducted each year from the University of Michigan, since more than 35 years, found the thinking of the High school seniors has changed. Children these days feel that they will own significantly more possessions than their parents. Higher materialistic expectations are reflective of today’s money-oriented world.

Children were not as demanding of a good college education or a well-paying job, or that their parents owed them one.
An online research involving 2,300 parents of children 18 and below revealed that only a third of the parents were really concerned and involved in matters pertaining to college. They worried about the financial consequences, how their kids would meet their college debt and whether the major the kids chose would get them a good job.

Some of these parents, realizing that financial obligations may be hard to meet, faced reality and opted to send their children to more affordable colleges.

But most preferred to live in denial and hoped that at the end everything would work out fine. “You can call us cockeyed optimists,” they said.

Families Rue They Cannot Send Their Children To Colleges Of Choice: Blame Economy For Their Woes by Harrison Barnes
Tags: the chum
Tweet Like Plus Pin It Share