Home  » Poised For Pandemonium: Strikes At America’s Largest Retailer On The Biggest Shopping Day Of The Year 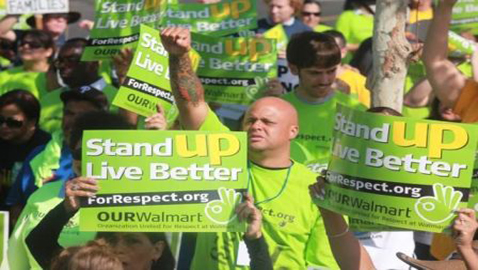 Black Friday, the day following Thanksgiving, is widely accepted as a day when shoppers buy the most. However, this may dramatically change this year, especially for Walmart.

Traditionally Black Friday is a day when Americans shop the most. Each year the day gets bigger and bigger. Stores remain open longer than usual, some don’t close at all and all offer fantastic deals and freebies.

Black Friday shopping means long endless lines, first for buying things and then paying for those said bargains. There’s a virtual stampede, especially in the bigger stores, where the offers are alluring and the once-in-a-year types.

Walmart, however, is not perturbed about the impending strike. Its spokesperson said that the strike would not affect its sales. It also released a massive 45-page advertisement regarding its showrooms, their bargains and their timings. Walmart as if challenging its striking workers has said that it will commence its Black Friday sale at 8 p.m. on Friday – it has previously never started so early.

Dan Schlademan, director of Making Change at Walmart said this virtually means that hundreds of thousands of workers will have to make do with not celebrating Thanksgiving.

Organizers are preparing for a countrywide strike against Walmart and are doing it in modern mode by going online. They are hoping that their online efforts go viral and that it spreads across the length and breadth of the country. The strike is a combined effort with the Labor organizers pulling in Engage Network as well Corporate Action Network, to ensure that their innovative technological strike is not a failure.

Employers are striking against working conditions and also claim that some of them have been retaliated against for participating in earlier demonstrations.

Walmart workers who are keen to participate in this day of action, are via a website directed to either find a store close to them, with an organized strike or to “adopt an event” wherever they find it convenient.

The need to go online arose as it was logistically not possible to cover the 4000 or so Walmart units across the country. Going online has broadened and increased the campaign’s horizons.

Supporters who are sympathetic to the striking worker’s cause can compensate the worker, who stands to lose a day’s wages, by donating grocery gift cards.

The campaign is using social media in a big way and marshaling strikers through Facebook, Tumblr and Twitter.  Marianne Manilov, cofounder of the Engage Network said that this has helped them to reach even rural folks who could otherwise have been ignored.

The organizers to ensure utmost success have not discarded conventional on-the-ground organizing and are mobilizing as many workers as possible as they can contact.

A spokesperson for the workers said that the decision to strike on Black Friday was a consequence of earlier actions which the retailer failed to reconcile and address worker grievances. In October, for the first time in the company’s history, upwards of 70 workers, walked out of their jobs, even if they did not have any union protection. But the precedent they set was followed by strikes in 12 other cities, mostly through online organizing.

There was another strike last summer, and it was labeled as the biggest strike against the company and the six-day pilgrimage of warehouse workers, that garnered nationwide attention, could not have materialized, without the social media sites.

“Making Change at Walmart,” the one who organized the online demonstrations has over 25,000 supporters on Facebook.

Walmart continues to be at ease. Not only has it announced its early opening times, it issued a statement saying that the striking group forms a miniscule part and the vast majority of its workers do not concur with them.

Poised For Pandemonium: Strikes At America’s Largest Retailer On The Biggest Shopping Day Of The Year by Harrison Barnes
Tags: black friday, strike and protests, walmart
Tweet Like Plus Pin It Share