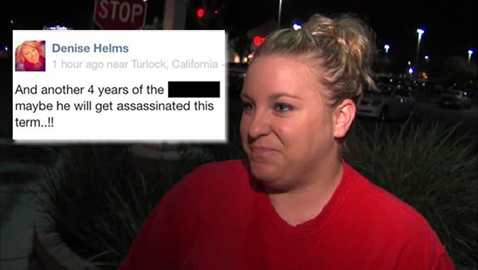 When Denise Helms vented her feelings on her Facebook account on Tuesday night, little did she realize that her racist, derogatory outburst would have serious consequences for her?

She wrote, “Another 4 years of this N****,” maybe he will get assassinated this term.”

Not only has she received all round condemnation, her company Cold Stone Creamery has given her the sack and worse the Secret Service, perceiving the outburst to be threatening is now scrutinizing her comments.

The Washington DC Bureau of the Secret Service say that they take all threats very seriously and investigate them thoroughly. Agent Scott Gillingham from the Sacramento Secret Service office said he would scrutinize her posts. If she is found guilty of intentionally and consciously threatening “to take the life of, to kidnap, or to inflict bodily harm” on the President, she could face a felony under US laws.

Even though she outwardly does not seem apologetic, with her sacking and criticism and being labeled a racist, how she must be wishing that her comments had not gone viral.

Even though she tried to put on a face of daring and misplaced heroism the words that she spoke to a news crew were a giveaway that given the chance she would not have behaved in so puerile and bigoted a manner.

On Wednesday answering a TV news reporters question she said, she did not think it such a big issue but admitted that the assassination part was rather inconsiderate. She said, it is not if I would go and assassinate him, but then ended up with something as offensive and distasteful as her previous rant, “but if it was to happen, I don’t think I’d care one bit.”

She reposted her thoughts on Facebook saying that her posts had got her a lot of media attention and that they came and interviewed her. Moreover, many people in Sacramento think that she was fanatical and racist.  “Wow is all I got to say!! I’m not racist and I’m not crazy, just simply stating my opinion.!!!” she wrote.

Meanwhile her workplace store director Chris Kegle, said that he was stunned to read her comments and they were not in consonance with the company’s ethics and values. He said that he and others at the workplace found the comments to be “very disgusting.”

The decision to fire her, he said, was not only because of her comments but also because of the outrage it caused in the community. He suggested that keeping her on, would make them lose face in the eyes of the community they serve and hamper their business.

The company’s Twitter feed was inundated by fuming tweets. Cold Stone immediately put out a statement saying that they had fired her and that she was no longer working for them. Moreover, what she has said is shocking, completely unacceptable and is not reflective of the way we view things, the company clarified.

To questions posed to her and asking whether she was racist, she replied in the negative. She said, that she had friends who were not American, but she also said that she does think of President Obama as a “N****.”

She however, said that as she is not a racist and does not like being labeled one. She said lots of people have been telling me that you sound so racist. If I did then I am taking my words back, “I take it back, If I could erase what I said, I would.”