Home  » Installer Jobs in Solar Industry the Way to Go 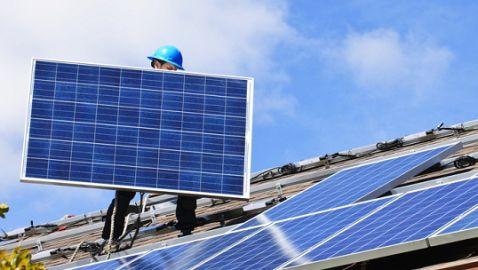 If you are planning on find a position in the green economy, specifically a gig in the solar power division, don’t entertain the thought of employment in a manufacturing plant.  Learn how to install, not create, the panels.  The Solar Foundation’s annual Solar Jobs Census stated on November 14 that more jobs can be found that way, according to Earth Techling.

They stated that at the close of September, installers had 57,177 workers in the United States, a 17.5 percent jump from last year.

“The growth by installers, especially at larger firms, signals that this subsector is heading toward a period of consolidation and maturation on par with other successful industries at this stage of the growth curve,” TSF Executive Director Andrea Luecke said.

Going solely off percentages, the general division that includes research, development and finance increased the most, jumping 46.1 percent in the last twelve months to 8,105 positions.

The manufacturing division has been tormented from overcapacity and buried by cheap Chinese imports.  They are headed the opposite way.  They had 37,941 roles last year and presently they have 29,742 jobs.  Rhone Resch is the leader of the Solar Energy Industries Association, which is solar’s top trade group.  They released a statement stating their sector is progressing and is still quite operable.

“While manufacturer jobs losses are unfortunate, this is a sign of a maturing and highly-competitive global industry,” Resch said. “We’ve seen this consolidation trend in other industries, and we’ll see it again. Still, more than 1,000 solar manufacturers operate in the U.S., and with strong demand expected in 2013, they are positioned to make a rebound. This makes it all the more important to continue smart federal and state solar policies that drive private sector investment.”

Earlier in November, the Solar Foundation released its most exclusive data from its yearly evaluation of solar business, marking total jobs in the country at 119,016, raised 13.2 percent from last year.

For 2013, companies are predicting that 20,000 new roles will be created.  Potential growth is normally errs on the optimistic side of things, however, although stable increases have recently been tracked.

“Though we have found in the past that employment projections tend to overestimate job growth, the actual growth documented by the Census series has nonetheless been impressive,” Luecke said. “The fact that such a large proportion of employers anticipate adding jobs despite the difficulties facing the solar industry suggests that solar employment will continue its upward growth trajectory.”

The Solar Foundation stated that the findings were put together from information gathered from over 1,000 organizations, putting the margin of error at +/- 1.5 percent.

How to Find Companies That Look for Productive Workers
Let’s Get Social
Feel like getting in touch or staying up to date with our latest news and updates?
Related Posts
Latest In Work Relationships
BCG FEATURED JOB