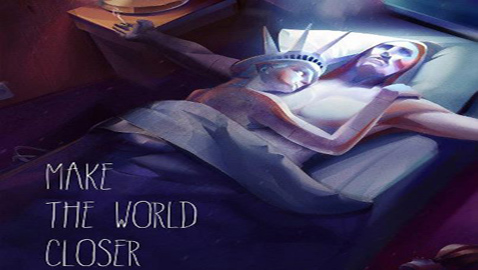 A blasphemous poster, purportedly for Ukraine International Airlines, has gone viral and generated a lot of criticism and outrage. The ad shows the iconic Rio de Janeiro’s enormous statue, Christ the Redeemer, in bed with a ruffled Statue of Liberty. The connotation is that they had some sort of physical intimacy and now are basking in its aftermath. Jesus can be seen with a cigarette in his hand as an unclad lady Liberty reposes blissfully on his bare-chested body, taking pleasure in a post-coital cuddle in a seedy motel.

Outside the window can be seen a neon sign that reads Motel, whilst the poster carries a tagline that says, ‘Make The World Closer.’  The bottom has a selvedge carrying the Ukrainian airlines name and logo.

One does not understand how this promotes an airline, unless it is to convey that those who are in a long-distance relationship can closer together, thanks to the airline.

What is also hard to comprehend is how such a heavily religious country such as the Ukraine, will react to this ad and it could have some serious adverse consequence for the airline. The answer was solved when it turned out that the airline had neither commissioned the ad nor did it have any idea about its existence until it went viral on the net and social media and the uproar began.

The secret was out, when it was revealed that it was a piece of exploratory work specifically designed to draw attention to the work of creative artist Aleksandr Bozhko. The artist is trying to get the offending poster removed from the net, but so widespread has been its infiltration that all his attempts are proving futile.

Ukraine International Airline has since claimed on Twitter that it has nothing to do with the advertisement. According to UkraNews it was done as a joke by the artist who wanted to enter it for the “Altai Fake Festival.”

However, it seems that the artist was not familiar with the physical dimensions of the two iconic statues. The Statue of Liberty is more than 300 feet in height and Christ the Redeemer at 130 feet is less than half her height – so ideally it should have been a petite Jesus resting on her giant bosom and not the other way round.

The artist Bozhko has since issued a statement in which he has clarified that the serious reaction to his creation has taken him by surprise. He acknowledged that it was not an ad for Ukrainian International Airlines; neither had they commissioned it, nor were they his clients. He said that he had drawn this in his spare time as a pioneering attempt at advertising.

The artist goes on to say that his intention was to enter it in the ‘Altai Fake Festival.’ Unintentionally however, it found its way into the pages of ‘Ads Of The World,’ and from there it spiraled uncontrolled to other sites. He said he was making conscious efforts to get it removed.

The artist has apologized to the United International Airlines and said that people must not misconstrue it as their creation, but see it as a humorous depiction, which what Bozhko intended it to be.

Even though the airlines stands absolved of all complicity in this matter, the use of religion to sell products or services is not new. Inevitably it leads to a lot of heartburning and controversy.  Despite the angst and pain that it causes marketers shamelessly for shallow commercial gains use faith-based themes, create controversies, get a lot of press and savor and bask in the free publicity.

There are many lessons to be learnt from this controversy, but the prime one must be that doing fake ads is treading on dangerous water, and with social media the danger of being drowned in its onslaught is extremely high.