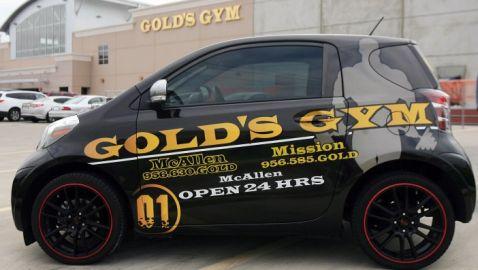 According to The Monitor, earlier this month, police Officer Frank Garcia was ticketed by the municipality of McAllen.

He was issued the ticket when Code Compliance found his Toyota Scion iQ parked outside of an apartment building on North 23rd Street.  His car was swirled in an advertisement endorsing Gold’s Gym as well as several other companies.  McAllen does not allow cars to park “where the main purpose of parking is for advertising”.

Nowadays, many companies in McAllen are using advertisement cars to promote their business.  Garcia’s tussle with McAllen could have large consequences for many parties.

The town ordinance for signs halts off-premise signs as well as portable versions to go along with parking purposely for advertising.

Vehicles used solely for official reasons are not deemed off-premise cars, because they are being used for business transactions.  However, the language is loose and depending on the circumstances, it still may be considered a violation.

For example, a business that owns an advertisement car parked out in front of their building or driving around town is not in violation of the municipality’s sign ordinance.  Now, if the car took up two parking spots and directly faces the road, that may be considered a violation of parking for the sole purpose of advertising.

Another provision of the ordinance could affect other items placed on the body of vehicles.  If someone swirls their car in their favorite team’s name and emblem, the Code Compliance of McAllen may issue a ticket to the driver as well as the team.

“It is a gray area. It’s definitely a gray area,” Deputy City Attorney Ignacio Perez said. “The only way we could find out if it would fly or not is for somebody, in this case the city, to issue a citation and take it to court.”

Garcia came aboard with the police department back in 2004.  The ticket and fight put up by him is certainly perplexing.  This is not the first time he’s been under the public microscope.  A few years ago, he arrested former Mayor Leo Montalvo under the suspicion of driving while intoxicated.

Companies compensate EyeZoom, who own five of the cars that Garcia drove.

“Basically, what a billboard does — that’s what we do,” Garcia said.

This all started when Garcia was rendered a ticket on October 23.  Supposedly, Garcia lent the vehicle to his friend who parked it outside his housing complex.

What Do You Think of Hillary’s Campaign Logo?

10 Tips to Improve Your Facebook Business Page
Let’s Get Social
Feel like getting in touch or staying up to date with our latest news and updates?
Related Posts
Latest In Work Relationships
BCG FEATURED JOB

Full-Time or Part-Time Corporate Attorney We are a boutique corporate and commercial transactiona...