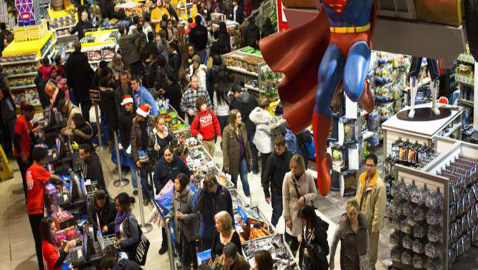 Come December and there is a mad rush to stores and online vendors to buy things, like they will not be available again. The media creates a hype that goods available on Black Friday, are at such discounts that are unbelievable and will be lost forever if shoppers miss out on the once-in-a-lifetime chance. Gullible shoppers line up outside of the stores, in early dawn, hoping to land that elusive television set or the mobile appliance that they had hankered for.

As if “Black Friday was not enough of a difficult to understand phenomena, it is followed by the maniac “Cyber Monday” where the same buying spree follows, albeit in more comfortable surroundings, as it is online.

Christmas and the holidays season has been hijacked by the big stores, who serenade the people through a glut of well manipulated ads that have only one underlying message, buy, buy and buy, laughing all the way to the bank.

But when you are buying the products, have you ever stopped and wondered where the product that you had purchased was manufactured? Who are the beneficiaries? You will find the majority of the consumer goods are manufactured in Asia, outsourced for the sake of profitability.

The manufacturers benefit, the product owners’ benefit, but who loses? It is the ordinary factory worker here in America, whose livelihood has been snatched away as thousands of local factories, which once manufactured these goods and appliances lie closed, never to open again. These small factories were the town’s lifeblood, providing jobs and a livelihood for the residents – alas no more.

With only personal profits at heart, multinational companies have bartered the local economy for a national economy. The small shops are images from the past, what you see today are bright neon signs of Walmart, Target, and Best Buy, flickering tauntingly, as you walk or drive past. Online too retailers like Amazon hold sway, the smaller ones stand no chance against their financial and resources muscle.

The reason why well-paying jobs have become scarce for American workers is because multinationals do not think twice about shipping jobs overseas. There the goods are produced at a much cheaper rate and also release the American manufacturer from such irritants as basic worker’s rights and paying at least a minimum wage.

Signs of this big fish swallowing small fish, or rather the bigger elephants trampling the smaller ones into oblivion are evident all around. Empty or shuttered factories are a common sight. There are increasingly fewer family owned small retail businesses, community banks have given way to big banks and grocery stores have been swallowed by the supermarkets.

All this while, poverty is increasing. The federal minimum wage is below the minimum wage in 1968, not in dollar terms, but in its buying power.

The mass consumerism that is fuelled by holiday consumerism which in turn is stimulated by a barrage of advertisements poses another problem. It leads to enormous amounts of waste we produce when we discard the gadgets that we buy in haste. Most gadgets get spoilt or broken within a few months.

Quality is intentionally kept poor or the company upgrades the product and makes a new one, purportedly with better technology and more facilities, rendering the first one obsolete.  It pays the company to keep it that way – it keeps customers queuing up to buy more and more each year, every year.

For a change to occur and to preempt the seller’s nefarious designs, make a resolution, “Don’t Buy What You Don’t Need.” As far as possible, don’t discard your purchases, try to get them repaired and use them for as long as possible.

Make another decision, given the harm they are causing to the nation’s economy and caring two-hoots about it, don’t buy anything from the big retail outlets. Buy from the local shops – you may end up buying a less popular gift for your loved one, but the gift that you will give to the nation will be huge.