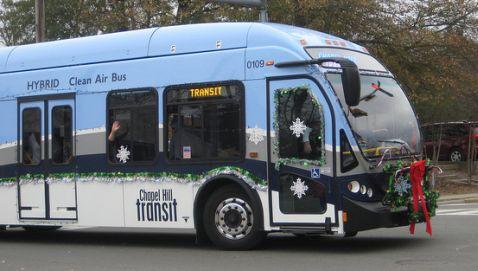 Town Council for Chapel Hill adopted a new bus advertising policy that accepts religious, political and social issues ads for the Chapel Hill Transit Buses, according to The Herald-Sun. The buses are going to have disclaimers printed on them that let riders know that the views expressed in the ads on the buses are not of the town or the bus system.

Roger Stancil, the town manager, sent the disclaimer in an email to the members of the town council. The disclaimer reads as follows “Advertising on this bus raises revenue to offset cost to the rider and does not reflect the views of the Town of Chapel Hill or Chapel Hill Transit.”

The interim director of Chapel Hill Transit, Brian Litchfield, noted that the disclaimers on the buses are currently being printed and that they will put on the buses sometime this week or next week.

The advertising policy for the town’s transit system has come to the forefront since a controversial ad was purchased and then placed on buses this past summer by the Church of Reconciliation. The ad from the church urged the United States to stop the military aid being sent to Israel.

Ads that can be banned by transit officials includes ones that are appear to misleading, false, disrespectful or deceptive. The town and the transit department could face legal issues in the coming weeks as the American Freedom Defense Initiative, which is pro-Israel, could purchase ad slots to publish its ad that describes Muslim jihadists as ‘savages.’

The executive director for the American Freedom Defense Initiative is Pam Geller and she sued to have the ads run on city transit operations in New York and Washington, D.C. Geller has dropped hints that she will sue Chapel Hill if it does not permit the ad on its buses.