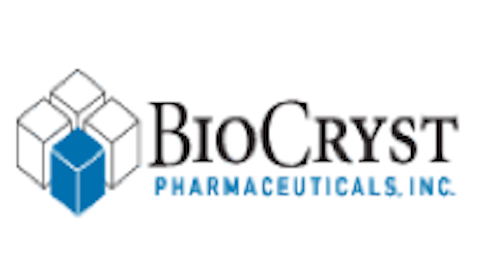 BioCryst is a name that many of you have very likely not heard at all in the past, unless you spend a lot of time looking at the bio technology field or reading drug research. For those of you who are not at all familiar with the company we are going to begin by taking a look at how the company has chosen to describe itself, “Founded in 1986, BioCryst has approximately 75 employees between the Company’s headquarters in Durham, North Carolina and its Discovery Center of Excellence in Birmingham, Alabama. With expertise in drug discovery, clinical development and regulatory affairs, we continue to advance our clinical programs and to generate new compounds from our own discovery engine. We are proud of our culture of engagement and accountability that rewards people for innovative thinking and achievement of key objectives. The commitment of BioCryst has remained unchanged. We continue to be passionate about advancing novel therapeutics for patients with serious diseases.”

The company is making job cuts that are sizable, but not quite enough to qualify as a mass layoff action in this case, as the company is cutting back on about 38 of its workers. In order to trigger a mass layoff action the company would have to have cut back on 50 or more workers. The company has put out a release about the changes it is making and why they have decided to cut back on costs, “BioCryst Pharmaceuticals, Inc. (NASDAQ:BCRX) announced today that in response to recent events and an assessment of its assets, the Company is restructuring and implementing a focused strategy to advance its hereditary angioedema (HAE) and antiviral programs. The restructuring is intended to significantly reduce BioCryst’s cost structure and scale the organization appropriately for its current portfolio. The Company plans to direct its cash and other resources primarily to enable the achievement of important near-term milestones for the BCX4161 HAE, BCX4430 broad spectrum antiviral and BCX5191 hepatitis C (HCV) programs. “The strategic focus and restructuring announced today is based on an evaluation of our programs and operations, following the setbacks in our peramivir and BCX5191 programs, as well as the delay in our BCX4161 program,” said Jon P. Stonehouse, President & Chief Executive Officer of BioCryst. “The restructuring is a necessary but difficult measure that impacts many talented and dedicated BioCryst employees who will be leaving the company. We are grateful for their meaningful contributions and commitment over the years.”

The company also recently released some information about the fiscal situation of their fiscals in relation to the job cuts, “BioCryst’s corporate restructuring includes a workforce reduction of 50 percent of the Company’s headcount, or 38 positions. Excluding restructuring and deal charges, cash savings of $15 to $18 million are expected in 2013, as compared to an approximate $40 million cash use expected in 2012. The Company expects to record a restructuring charge of $2 to $4 million in the fourth quarter of 2012. For 2013, preliminary cash utilization guidance is in the range of $22 to $25 million, excluding restructuring and deal related costs. Detailed financial guidance for 2013 will be provided with the fiscal 2012 results announcement in February 2013.”