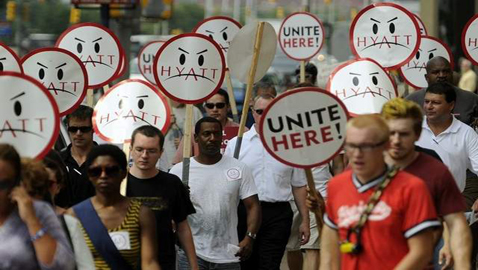 Earlier this year, upwards of a dozen low wage earning workers, mostly Latino, working in ten Indianapolis hotels, had filed a class-action suit, charging that their employers and the recruiting agencies had regularly cheated them out of their wages, with the active connivance of the hotel management.

The workers, most of whom worked as housekeepers, dishwashers and other similar category jobs had claimed that they were forced to work beyond their stipulated timings, without breaks, and many a time their earnings-per-hour went below the mandated $7.25 minimum wage.

Unite Here, the worker’s union that was fighting the case on behalf of the workers announced that they had settled their lawsuit and opined that it would herald noteworthy amendments within the hotel industry and would force alterations in labor practices throughout the city.

However, the union declined to give detailed information about the settlement claiming that the confidentiality clause that both had agreed to, prevented them from doing so. However, one plaintiff, Eva Sanchez, said that she was extremely content and happy with the final result. She further said that she felt a sense of accomplishment; standing up for her rights and inasmuch the lawsuit led to optimistic changes that augur well for the workers in general.

Another one of the plaintiffs, Salvador Perez from Mexico, whilst expressing delight over the outcome, recollected that he was constantly made to work for 40 hours, but paid for only 35. The exploitation has ended, he said and said earlier we could not buy diapers for our children and had to depend on food pantries and churches to feed our families.

Labor experts believe that the settlement will impact the system of outsourcing in-house jobs to staffing firms, a modus operandi cleverly used by the bigger houses. It served a dual purpose, it safeguarded the houses from charges of retaliation for speaking out against the management and even claims of being underpaid, would have to be addressed by the staffing firms and enable them to shift the legal onus away from them.

The subcontracting deal was legally so faultless that in the workers’ lawsuit, none of the ten hotels that were involved were made defendants and only the Hospitality Staffing Solutions were mentioned therein.

The company issued a statement through its lawyer saying that it had agreed to settle in good faith and to ensure that legal expenses were avoided and that work could continue unhindered by the protracted official procedures. Moreover, it said, the company was morally committed to the workers getting paid for every single minute of their labor.

Unite Here, the union that organized the workers have made a dent in the Indianapolis hotel market, that earlier had practically no unions. They are claiming victory and said that it was a landmark win and the biggest wage and hour case in the annals of Indianapolis hospitality industry.

The union alleged that the pervasiveness of subcontracting had, apart from absolving employers from all labor violations, also created two sets of workers. Those the hotel took on board directly were paid more and had benefits that included health-coverage; all these the subcontracted workers were denied and deprived of.

Furthermore, they alleged that once a worker came through a staffing firm, he would have to come through them again and finding direct employment was virtually impossible. Workers had to quietly do the employers bidding, so much so, one of the plaintiffs,  Elvia Bahena, was fired in retaliation to her complaining against workplace violations during a city council hearing.

Following the lawsuit, workers are finding it easier to seek direct employment and some are even being provided holidays, sick leave and are seeing wage increments for the first time since their employment.

Had the city’s mayor, Greg Ballard (R), not vetoed the legislation that sought to forbid hotels from hiring from staffing agencies, things would, perhaps have not come to such a pass.

Whitefish office of our client seeks commercial attorney with 4+ years of experi...

EXPERIENCED PROBATE PARALEGAL - WORK FROM HOME! If you have the knowledge, this is your dream job...

Attorney The candidate must have achieved academic distinction from some of the nation’s most...