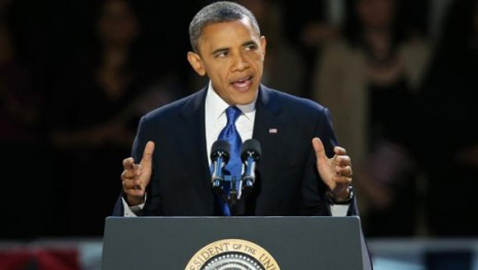 There are upwards of two million home care workers in the US, caring for the sick and the elderly, yet denied the basic protections that other US workers take for granted. There is no assured minimum wage nor do they get paid adequately for overtime, if they get paid at all and given that most of them are immigrant workers, there have been many cases of employer abuse as well.

A year ago, they had reasons for hope and were justified in their faith that things would improve, when President Obama personally assured them that his administration was committed to mandating a federal rule that would extend to them complete labor protections, that would include a guaranteed minimum wage and fixed overtime payments.

On Thursday, some of the women, in whose company and presence the President had made the promise, sent him a letter reminding him that his assurance has not materialized, even though it was part of the President’s “We Can’t Wait” program – a year has passed, Mr. President and the wait’s still not over, they wrote.

However, it seems that the desired changes have become enmeshed in red tape and political expediencies, delaying its execution or at the very worst, allowing an archaic, almost four decades old law, to prevail.

In their letter the home care workers lamented that not only were the new laws not forthcoming, wages in many states had actually gone down. Working conditions had also deteriorated and workers were seeking alternate work, which could lead to a huge shortage, in an industry where work was greater than ever.

The letter written by Thelma Reta, Iterra Blackshear, Tracy Dudzinsky, Karen Kulp, Robin Shaffert and Sascha Bittner said that it was ironical that what is one the country’s most needed and fastest growing occupations, was also one of its least paid ones.

Moreover, they went one to write, poor pay meant dependence on public assistance which was highly degrading and did not pay them their merited appreciation, respect and dignity for providing selfless priceless care for the elderly and the handicapped.

However, it is not so easy to implement new rules and even if the intent is there, may take months or years, to overcome or circumvent demands from interested groups that pressurize the government to either, not implement them, or postpone them or at least dilute them considerably.

However, the new legislations for home care workers has the personal approval of the President himself and he has made a public declaration that their lot would improve and that he was committed to it. But considering that the “fiscal cliff” parleys are leading nowhere, it would be logical to assume that home workers would not be on his list of priorities for the moment.

Advocacy groups, like David Ward’s Direct Care Alliance, said that the change was way behind schedule and that’s it would change lives of thousands of people for the better. He said that inspite of the President concurring with the need for improving these jobs; it was exasperating to have to continue to wait.

Home care service providers said that the wished-for changes would do more harm than good, disputing that it would make the service more expensive and out of reach for people with preset or poor earnings many of whom depended on Medicare and Medicaid reimbursements.

A home care worker in Florida, asking that her name not be used, said that she logged in more than 70 hours of work every week, yet was paid no overtime. She said her husband earned more for working half that many hours.

However, she said that she loved her job and would continue to do it, even if the desired changes were not made by the lawmakers. She said that her passion for the work and desire to do good for the needy, drives her and not her paycheck. She said that she would certainly like to see the changes, but if someone is in this profession only for money, they’ve got their priorities mixed up.