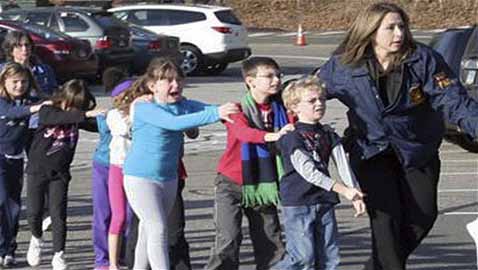 The horrifying tragedy in the Sandy Hook Elementary School in Connecticut, where 28 people were shot dead, 20 of them children, has left the country, shocked and thunderstruck.

It is but natural people across the country, will want to know about what happened and try to piece things together to understand what happened and why it happened. For this they rely on the media to bring the news to them in a responsible and mature way.

But it seems that the media have a schedule of their own which they will pursue, unmindful of the immensity of the tragedy and throw all norms of civil behavior out of the window. Media, in an effort to be the first with the news and to ensure that they get the maximum number of readers or viewers, at times or rather most of the times, cross the lines of acceptable behavior of decorum, decency and civility.

Within minutes of the tragedy unfolding, reporters rushed to the spot, asking eight and nine year old kids’ questions that the elderly would be hard put to answer.  Reporters asked such inane questions as, “Are you glad to be alive?” “Did you see the shooter?” One reporter touched a girl and asked “Are you all right?”

“Was everybody crying, scared, wanting their parents to come get them?” a CNN reporter asked a young girl. How stupid? What did the reporter expect the girl to answer: “No, everybody was cheering and laughing and happy that the school was over for the day.”  It was fortunate that the girl was accompanied by two adults, probably her parents.

At a traumatic time like this a young impressionable child, does not need a camera or a microphone thrust into her face. She needs to be held in the comforting and reassuring embrace of parents and loved ones and told that everything will be all right – the story can surely wait.

Okay, the story cannot wait, but get the news from the officers on duty, community leaders, the politicians who converge on the spot, but a child saying something on television always makes for the better sound bite.

The media will argue that it is the fault of the people; they want to be as close to the tragedy as possible and look to the television people to bring it to them. How they do it, is their problem?

Bruce Shapiro, executive director of the Dart Center for Journalism and Trauma said that putting a child on camera does not enhance the story in any manner. The kid’s understanding is partial, more so since at the moment he is terrified and bewildered. What he or she says will add to the confusion and make the child relive the traumatic experience again.

Trauma experts are strongly advocating that the children should not be exposed to news coverage of the tragedy as this can cause a lot of anxiety and nervousness.

What the media should concentrate on is to talk about guns and how they can be brought under control. Talking to small frightened kids will fix nothing – such things are happening too frequently to make media capital out of it and then shift to a newer tragedy as and when it unfolds.

The coverage of the massacre has been extremely insensitive and unsatisfactory and borders on being irresponsible and unscrupulous. There should be some respect for privacy and consideration for the victims. This tragedy concerns us all and we dearly want the media to cover it – but the healing and comforting must come first – the story should always be the one to follow not precede it.

It would suit the media well to remember that none of the 20 kids who died, are coming back, but the next time it happens you could be the parents, there’s no guarantee we won’t be next – use your power, reach and strength to demand that America regains its right to be called a civilized nation – for the moment we, sadly, seemed to have lost it.