Home  » Instagram Agrees To Review New Privacy Rules After User Furor: But You Cannot Stop Them, Read The Fine Print 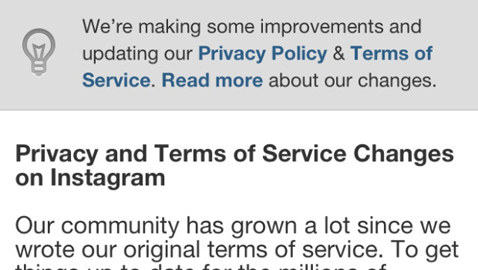 Instagram has confirmed that it would use the photos it had, as advertisements for its many clients and its new privacy policy leaves no doubts whatsoever, that it can sell your photographs and use them in advertisements, without paying you a cent and not bothering to inform you as well.

People who believed otherwise were either too naïve or simply idiotic, in the sense that it is too lucrative an advertising data to overlook and ignore. The 100,000 plus advertisers that Facebook has, the company that now owns Instagram, just cannot wait to avail of the opportunity.

However, the company has been forced to rethink its privacy policy as the announcement that it intended to make the photographs a revenue generating source and that they would exercise sole control over it, has created an unanticipated furor amongst its upwards of 7 million users.

Kevin Systrom, co-founder of Instagram had to quickly come into damage repair mode and said that the wordings of the new policy were “confusing” and an error on their part, which led to the erroneous belief that the company intended to sell the photographs.

The true intent of the company was using a user’s information, to allow businesses to specifically target them for their products and services and gain new clientele. He said they were rephrasing the rules in more comprehensible language that would clear the prevailing confusion and doubt.

He further went on to say, the reason why the new rules are not coming into effect immediately and only a month later, is because they wanted users to suggest any changes and voice apprehensions if any. Now that you have done so, we will address them in the best way possible, he said.

However, it was obvious that the outrage had forced this clarification and users were skeptical and cynical about its earnestness. In addition it was not certain whether the offer of pacification would be good enough to the thousands of people who have openly challenged the privacy policy, to go into effect mid- January, next year.

Many celebrities and photographers who were using the service as a journalistic tool have termed it as a betrayal of trust and said they would be left with no alternative but to remove their accounts.

Photographers have alleged that the platform had the potential of becoming a ground-breaking stage for visual communication. Cameramen went to extreme lengths and exposed themselves to danger, to click photographs of the Sandy storm, the war in Gaza and photographs of historic importance, such as the presidential elections which they later uploaded on the service.

A photojournalist, Ben Lowy uploaded a photo of his son holding a sign that said, “Goodbye” along with a message saying that photography to him was an obsession, his work and his means of putting food on the table for him and his family. He accused the companies, Facebook and Instagram, of wanting to profit from his efforts.

Instagram’s popularity escalated owing to the very simple procedure of uploading pictures on it and people began to use camera phones to document and share every single moment of their lives, on Facebook, Twitter and Tumblr.

It is uncertain what new twist will be given to the privacy rules. Common business sense says that the worth and value of the data and its ready availability, coupled with the data that Facebook has, makes it an advertising opportunity too good to be missed. It has a hundred thousand advertisers drooling over the chance to feast over it. So whether you like it or not, the company will go ahead.

If you don’t want your images to be used and want to opt out, there’s only one option – don’t use the service. The rules say that if you log into Instagram, it will be taken as consent on your part, permitting them to use your content in ads – it’s as simple as that.