Home  » It’s Election Day, but Did You Vote? 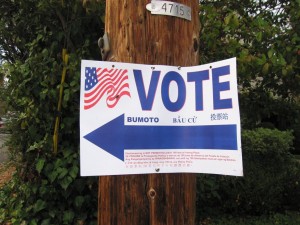 Today was a big day: Americans went to their polling places and cast votes in a historic election for the man, or woman in the case of the Green party, they believe best suited to run this country of ours. So who’d you vote for? Was it Obama or McCain? Or maybe you went a different direction and voted for the Libertarian candidate, Bob Barr, or maybe the oldie but goody, Ralph Nader? Seriously, how many times has he been on the ticket? Maybe one day, Ralph…

Who ever you chose to vote for, someone is going to be out of a job tomorrow… and need a new one. If your chosen candidate doesn’t win today’s big race, what ever will they do, hm? Well, let’s discuss.

For time’s sake, we’ll just go over the big two: John McCain and Barack Obama. So what could possibly be in store for them next? There are the two most obvious careers for each: law for Obama, military for McCain, and the senate for each. But maybe they want to try something different?

Obama has a lot of past experience in community organization and advocating on behalf of the proletariat. If Obama doesn’t grab enough votes to be our next presidente, I would suggest he check out PublicInterestCrossing.com, DiversityCrossing.com, or EducationCrossing.com. These are just a few of the EmploymentCrossing.com job sites dedicated to finding THE MOST jobs.

Should McCain not succeed in becoming our next Commander-In-Chief, he’s got options, too. His past experiences are rather involved with his military career (MilitaryCrossing.com), but a couple things do stand out: his time as a naval aviator, his time as a POW, and the large number of children (seven) and grandchildren (four) he has– sheesh, that’s a lot. That said, I think McCain could greatly benefit from a free trial to AviationCrossing, CounselingCrossing (using his POW trauma to counsel other vets), and WorkAtHomeCrossing…I’m sure he’d like as much time at home with the grandkiddies as possible!

Just as their backgrounds and experience are diverse, so are the offerings of EmploymentCrossing. Check it out and see what you could do with your life experience.

For those of you who haven’t done your civic duty yet, hurry up before the polls close and happy voting!

Email Processor Jobs
Let’s Get Social
Feel like getting in touch or staying up to date with our latest news and updates?
Related Posts
Latest In Work Relationships