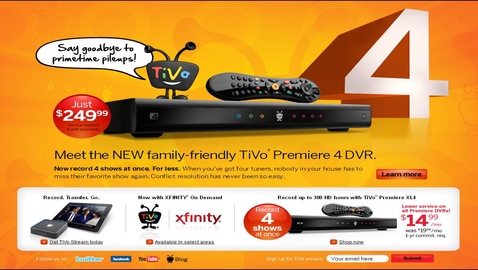 TiVo, the digital video recorder maker said on Monday that they had settled a patent lawsuit with Verizon Communications and would receive at least $250.4 million from them. At the beginning of this year the company had reached a similar deal with AT&T, which agreed to pay $215 million.

Given that it had come out on top in patent cases against Dish Network and EchoStar last year, it seems that they are generating more revenue from settling suits rather than through their licensing fees.

TiVo, has been struggling over the last ten  years, eight of which have been unprofitable. The company has stated that the settlement deals are bridging the gap and bringing it closer to profitability.

Following the announcement of the Verizon settlement, share practices of TiVo rose up by 4 percent to close at $9.94 in New York, the most it has increased since the first week of September.

TiVo shares rose 4 percent, to $9.94, at the close in New York, the biggest advance since Sept. 4. The stock has risen 11 percent this year.

This comes as a boost to their revenue even as they face stiff competition from low-cost rivals. Analysts believe that the settlement could set the tone for other similar cases that TiVo has against other companies, including Time Warner Cable and Google owned Motorola Mobility.

Its success bodes well and has given companies like Motorola strong reasons to settle. Barton Crocket, an analyst at Lazard Capital Markets says that since TiVo sued Time Warner Cable in connection with the Motorola litigation the settlement will give TiVo the upper hand in all the cases. “It also potentially sets the stage for a similar settlement with Time Warner Cable over the next year or so,” Mr. Crockett said.

TiVo said Verizon would initially pay $100 million in cash, and recurring quarterly payments totaling $150.4 million through July 2018. Not only would Verizon have to part with substantial amounts of money, the new internet streaming service that Verizon is developing with Coinstar’s Redbox could carry TiVo boxes.

Moreover, Verizon would have to pay license fees each month till July 2018 for every Verizon DVR subscriber, beyond a certain number. The companies also agreed to dismiss all pending litigation between them.

Tom Rogers, chief executive officer of TiVo issued a statement saying, “We are pleased to reach an agreement with Verizon which underscores the significant value our distribution partners derive from TiVo’s technological innovations and our shareholders derive from our investments in protecting TiVo’s intellectual property. We also look forward to working together on a variety of future opportunities as we continue to expand the content choices available to TiVo subscribers.”

Inspite of being the pioneers of the first commercially available DVR, a decade and half ago, they have failed to struggled to capitalize on the invention. It seems that the settlements are giving them more money than they have been able to earn through their business pursuits.

Want to see which Media jobs are available near you? Click here to see.

What Can AdvertisingCrossing Do For Me?

Use the Holiday Season to Get Prepared

10 Highest Paid Advertising Tech Executives
Let’s Get Social
Feel like getting in touch or staying up to date with our latest news and updates?
Related Posts
Latest In Work Relationships
BCG FEATURED JOB

San Diego office of our client seeks associate attorney with experience. The can...

Johnstown office of our client seeks attorney with 1-3 years of experience. The ...

Bodily Injury Team Manager The candidate will be responsible for the management, control and day-to...