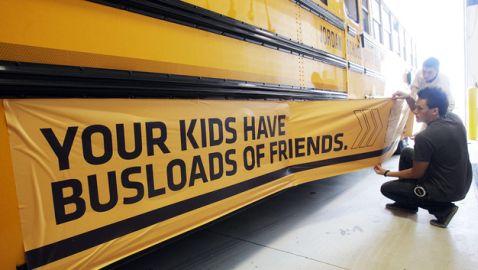 Chapel Hill has discontinued its bus advertising procedures and will not receive new advertisements after transit officials found out that they utilized an incorrect draft ordinance to decide what advertisements were used, according to the Herald-Sun.

The Town’s Council approved a different ordinance in the summer of 2011 that was more restrictive, but that was not the one that was in effect.

That one would have helped to ban the likes of controversial ads involving religion, politics and other social issues while the other draft ordinance had allowed that to take place.

Steve Spade is the Transit Director.  He wrote the town council that the error originally took place when he needed a copy of the policy and grabbed it from the materials included in the packet provided by the council.

Changes and bans regarding religion, politics and social issues were addressed but were done so in separate supplemental materials that the council approved.

Turns out they had been using the draft policy, rather than the approved one since June 2011.

The biggest issue of late was the controversial Church of the Reconciliation ad urging the U.S. to end military aid to Israel from that have been seen inside Chapel Hill transit buses

Chapel Hill Mayor Kleinschmidt stated that these ads were not legally supposed to be on the buses.  However, religious and political ads have appeared inside or outside buses since the 2011 approval of the policy by the township council.

On October 24, the mayor motioned to his council that they suspend bus ad policies until further notice or until a new policy was created.  The vote came in at 6-1 in favor of the suspension.  At the November 5 council meeting, the issue will be discussed in more detail.  For the time being, Chapel Hill will honor current contracts until they run out or new guidelines are put in place.

This decision comes after a proposal was submitted by the American Freed Defense Initiative (AFDI), in which five pro-Israel ads were to appear on the outside of buses for as long as six months.  The ad’s text reads as follows: “In Any War Between the Civilized Man and the Savage, Support the Civilized Man. Support Israel. Defeat Jihad”.

The AFDI’s executive director, Pamela Geller, has fought tooth and nail to have the ad displayed in public transportation sites in New York and the nation’s capital.

In response to whether or not she would sue to have Chapel Hill place the ads on their township buses, Geller responded that she would respond to such a “violation of our First Amendment rights.”

Want to see which Advertising jobs are available near you? Click here to see.