Home  » Kanabec County Has Highest Unemployment in the State 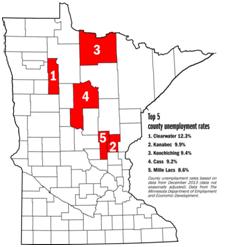 In the United States, the jobless rate is slowly lowering as new private sector, government and miscellaneous jobs are being added. Industries like construction, tourism and healthcare are more optimistic with more job prospects for these and other industries. The same can be said for Minnesota, with the exception of Kanabec County, that has the highest unemployment rate in the entire state, according to the Kanabec County Times.

The most recent numbers show that is the county there is only an available labor force of just over 8,000 people with 314 businesses open and running in Kanabec. This comes after reviewing the county profile data by the Central Minnesota Jobs and Training Services (CMJTS). Barb Chaffee, the CEO of CMJTS, and Rita Borchert, the Regional Manager, commented that the workforce service area in Kanabec includes neighbor counties including Renville, Kandiyohi, Mille Lacs, and Pine. There are young people and college graduates looking for work, along with middle-aged and older adults who lost their recent positions. It creates a lot of competition and not enough work for everyone.

Chaffee told reporters: “Our overall goal is to get people back to work.” She mentions that most assistance programs in the county are federally funded, helping businesses find suitable employees and providing special job training programs.

Near the end of 2013, the unemployment rate in Kanabec County was the highest in their 11-county region at 9.3 percent and twice as much as the 5.1 state average. Minnesota overall doesn’t struggle with having an extremely low job market, but Kanabec and nearby counties just don’t have enough jobs to go around. One of the biggest challenges is that the county has so few businesses – only 314 in the county – and 3,785 employed workers. Last year, only 40 new jobs were added to the county, which is only a 1.1 percent increase in employment availability. The wages have stayed the same between 2013 and 2014 with $30,420 a year being average.

Overall, the population in Kanabec County is slightly older than other counties in this part of Minnesota. While there are programs available to help at-risk students, drop outs and high school graduates, the majority of people needing work re middle aged or older citizens. The county is small, with just 16,239 people as of 2010. Approximately ¼ of the population is under 18, while there is a significantly higher percentage of an individual between 45 and 64.

The population has remained about the same size for the last decade, but unemployed workers is going up as unemployment throughout the country has gone up. There haven’t been many new businesses or new prospects to employ everyone in the county that needs a job. The strongest industries in Kanabec County are manufacturing, retail and healthcare.

Click here to find out which are jobs are available in Minnesota.