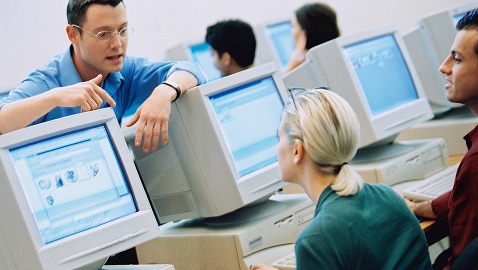 The Generation Gap is a popular term to signify the differences between younger and older people. It’s typically used in reference to parents and their children, but according to a recent CareerBuilder survey, there also seems to be substantial distinctions between age groups in the workplace.

A study posted on CareerBuilder’s website shows that younger employees differ from their elder co-workers in a number of ways, from career prospects, how they communicate with others and the manner in which they work. The survey focused on two age groups of managers and employees – the younger generation, ages 25-34, and those closer to retirement, ages 55 and older. Almost a third of the workers who participated in the survey have a boss who’s younger, and 15 percent are working for a person ten years their junior.

The older age group, it seems, prefers conversing with co-workers in person, with 60 percent choosing the old-school method and the younger employees a little less at 55 percent. The younger group communicates via email or texting, holding a steady 35 percent while only 28 percent of the older workers talk with fingers and thumbs. Both groups, however, have allowed the phone to fall by the wayside.

How do the young and old see their careers in the future? Sixty-two percent of older workers believe they should retain a job for at least a few years, with only 53 percent of younger workers concurring. The younger group is generally only willing to stay with a job until employees feel they’re ready to move on (47 percent) and expects a promotion every two or three years (61 percent). This is in sharp contrast to the older workers, with 38 percent sticking around long enough to attain the necessary skills and 43 percent waiting for that promotion.

Evidently, the younger employees are working less, with 64 percent logging eight hours or less a day versus 58 percent of older workers. But while older managers are more likely to make it to work before 8:00 am and stay past 5:00 pm, younger managers had a higher percentage of taking their work home in the evening. Younger workers were also more willing to work flexible hours, with 29 percent believing that making it to work on time was less important than getting the work done – only 20 percent of older workers agreed.

Interestingly, youthful exuberance apparently does not entail bypassing a work plan and getting straight to work. Forty-eight percent of younger workers like to plan their work before starting, against only 38 percent of older workers, while a greater percentage of older employees prefer to work first and ask questions later, so to speak.

And on what issue did the two age groups share the same opinion? Lunch. More specifically, eating lunch in solitude, with nearly 60 percent of both groups enjoying their lunch hour alone instead of spending it with fellow employees.

The online survey was conducted from May 14 to June 4, 2012, by Harris Interactive on CareerBuilder’s behalf. Those who took part in the study included 3,892 U.S. workers and 2,298 U.S. hiring managers, all employed full-time.

Study Finds a Distinction Between the Young and the Old in the Workplace by Harrison Barnes
Tags: career, email, employee survey, manager, study
Tweet Like Plus Pin It Share