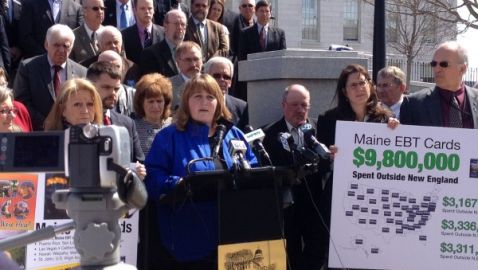 A discussion that started over cash benefits provided to low-income families through the county assistance office has led to some political drama. While both Republicans and Democrats agree that more needs to be done to prevent fraudulent use of cash benefits provided to families, the Republicans believe that Democrats are simply not working hard enough to prevent these benefits from being used by those who really do not need them, according to the Bangor Daily News.

However, Democrats have made it clear that certain reforms would take away from those who truly need the benefits, especially since some families rely heavily on the government assistance to survive.

LePage believes that spending money on welfare should be limited much more than it currently is right now. Over the past few weeks, he has been looking at bills that would help to reduce the number of people who are fraudulently using the electronic benefits transfer cards. These particular cards work much like debit cards.

Those who receive them can use the food supplement money, TANF money, and Social Security disability all with a swipe of these cards. There is now some criticism on how some people use these cards to purchase non-necessities, including cigarettes and alcoholic beverages. The bills that LePage is proposing will be given to the Senate in the coming week. Senate will decide whether or not to pass these bills.

Representative Jeff McCabe, D-Skowhegan, discussed these limitations and restrictions. He stated that even though the amendment he was working on did not turn out so well, he is openly willing to discuss and work alongside of Republicans to come up with a compromise that would benefit everyone.

The amendment that he originally worked toward would have prevented individuals on TANF from being able to use their cash benefits to buy alcohol and cigarettes in the first place. McCabe also expressed true concern over the children in Maine. Many low-income families need these benefits for food and other basic necessities, and certain penalties could cause the children to suffer in some way or another.

A press conference that was held during the week showed significant data from 2013. EBT cards from the state of Maine had been used in different states across the country. The senior policy analyst for the Maine Equal Justice Partners, Robyn Merrill, said that EBT fraud is much more of a bigger problem than TANF fraud, which seems to be slightly lower.

Merrill said that while cards had been used in Puerto Rico, Hawaii, and other states, it is possible that families were just traveling to visit other family members. Some also argue that those who receive SNAP benefits should be able to use them anywhere they go, especially since they are accepted in all states.

Want to see which hourly jobs are available near you? Click here to see.

The 6 Top Benefits Millennials Are Asking For
Let’s Get Social
Feel like getting in touch or staying up to date with our latest news and updates?
Related Posts
Latest In Work Relationships