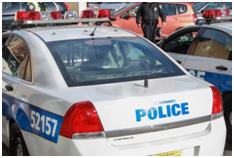 The Port Authority has recently become aware of a group of retired police officers from New Jersey and the New York Police Department (NYPD) who have been double dipping. They were found to be accepting their police pensions following retirement, but also earning a generous income from a new position, which should not be allowed with pension, according to The New York Post.

A total of 11 retired cops are guilty of double dipping, receiving annual pensions of over $80,000 a year. They also have new salaries of $150,000 a year, giving them nearly a quarter million dollars a year during their retirement. They are working for the Port Authority, not only receiving the hefty income, but additional perks like a free EZ-Pass and a vehicle they can bring home with them.

Of the 11 double dipping cops, nine of them work either for New Jersey State or the NYPD. They are also receiving an additional $12,000 a year as a bonus that arrives in their account every December. The other two cops found guilty of double dipping are a retired Mount Vernon police commissioner, and previous Newark police captain.

The Port Authority reported that they needed to hire new employees and starting searching throughout the United States, finding candidates mostly from New York and nearby areas. They didn’t give exact details about how many applications they received, but an inside source believes it is over 600. They do have a history of accepting double dippers, including three of their top police officials. In their defense, the Port Authority claimed they had to hire these new officers because their lieutenants couldn’t take promotions due to losing overtime pay and union protection.

There are several critics against the Port Authority and their hiring tactics, going beyond the money and double dipping issue. For example, many believe that they lack diversity by hiring only white male. No women and no diversely cultured individuals were hired for the positions. As far as the double dipping goes, this goes against some state regulations, while others, such as New Jersey, don’t yet have a strict law against it.

While New Jersey doesn’t have a rule about double dipping, they are currently working on a law that they hope will make it through New Jersey legislature. With this bill, it would suspend the pensions of public employees who have retired and are working in a public employment sector with compensation over $15,000 a year.

New York is a state that currently has a strict no-double-dipping policy, but as with any system, there are loopholes. There is currently no news as to what will happen with these 11 cops caught double dipping and working for the Port Authority, and whether the PA will be charged with anything.

Where can you find the most government jobs? Click here.

What Should You Do Once You Receive a Job Offer?
Let’s Get Social
Feel like getting in touch or staying up to date with our latest news and updates?
Related Posts
Latest In Work Relationships