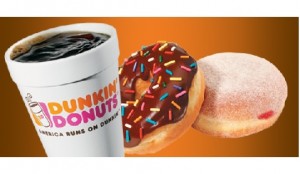 Dunkin Donuts will be hiring a bunch of new people in California where the donut shop hopes to compete in its new market: drinks. As coffee and other drinks account for 58 percent of their profits, they now consider themselves a drink company.

“We are a beverage company,” said Paul Carbone to investors.

With Starbucks ruling the world as a coffee outlet store, they’ve inspired some competition, including McDonalds and their deplorable tasting lattes, and Dunkin Donuts, who do much better, and also whose drinks are noticeably cheaper than Starbucks.

The company is Boston Based, where there are 2,000 Starbucks stores – stiff competition – and Dunkin itself operates 7,400 stores, but is looking to open up new outlets, 15,000 of them, in the next few years, including many in California. They also look to open more in Texas as well, and move Westward. They opened up in Las Vegas first in 2005.

And coffee is the way they’re going to do it. Caffeinated beverages are the “holy grail” for profitability in expanding their market. And with all the new locations they hope to hire, there will be different levels of management they are looking to fill. It may not be the ideal job, but a job’s a job, and one can always grab a donut on break.

Post Office To Deliver Parcels on Sunday
Let’s Get Social
Feel like getting in touch or staying up to date with our latest news and updates?
Related Posts
Latest In Work Relationships