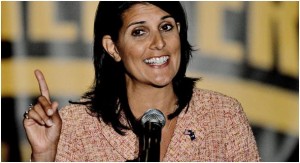 The Governor of South Carolina, Nikki Haley, recently said that union companies are not welcome in the state, according to WLTX. There are non-union jobs in the state with Boeing, Michelin and BMW.

On Wednesday, Haley said that she discourages companies from constructing new facilities in the state if they intend to bring a union when they move.

“It’s not something we want to see happen,” she told The Greenville News. “We discourage any companies that have unions from wanting to come to South Carolina because we don’t want to taint the water.”

Haley’s Democratic opponent in this year’s gubernatorial race, State Sen. Vincent Sheheen, said that he wants the state to be a place where employees can choose to join a union or not.

“But I also think that if Ford Motor Co. wanted to bring 10,000 jobs to South Carolina, we would welcome them with open arms,” Sheheen said.

“We need good, high-paying jobs in South Carolina. Part of leadership is putting ideology and partisanship to the side when there’s something that could be good for South Carolina.”

The Republican bias against unions in the state took off during the first year of Haley’s term. This is when the National Labor Relations Board took a case to court in an effort to block Boeing Co. from producing its Dreamliner jet at a new facility in North Charleston.

She then issued a promise to those in attendance that she will continue to fight against the penetration of a union.

“You’ve heard me say many times I wear heels. It’s not for a fashion statement,” she said. “It’s because we’re kicking them every day, and we’ll continue to kick them.”

The state secretary of commerce, Bobby Hitt, said that he does not remember the last instance of a company wanting to bring a union workforce to South Carolina.

“Companies that are traditional union companies don’t seem to come looking for an operation in South Carolina,” said Hitt, a former BMW executive appointed by Haley. “I think our brand and our image precedes us in that regard.”

Lewis Gossett, who is the president of the South Carolina Manufacturers Alliance, organizes the auto conference in Greenville. Gossett agrees with Haley’s stance on unions in the state.

“Organized labor has no place down here,” Gossett said. “We don’t need them. We don’t need them to replicate what they’ve done in the Midwest and the Northeast. The governor gets that. And she’s taken some very strong stands about it, and we love it.”

Teen Employment in Iowa Cloudy
Let’s Get Social
Feel like getting in touch or staying up to date with our latest news and updates?
Related Posts
Latest In Work Relationships