Home  » Military to Make Major Cuts to Jobs and Spending 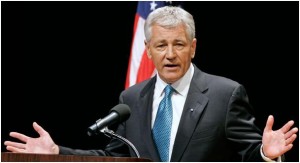 Defense Secretary Chuck Hagel announced a massive cut to the military, bringing to its pre-World War II size, according to CNN. Hagel also said that the A-10 “Warthog” will also be retired.

“This is a budget that recognizes the reality of the magnitude of our fiscal challenges, the dangerous world we live in, and the American military’s unique and indispensable role in the security of this country and in today’s volatile world,” Hagel said. He was announcing the spending plan for the Defense Department for 2015 and further.

“There are difficult decisions ahead,” he added. “That is the reality we’re living with.”

The first portion of downsizing the military occurred with Hagel’s predecessor, Robert Gates. The downsizing comes with modernization and budget issues.

“For the first time in 13 years we will be presenting a budget to the Congress of the United States that’s not a war-footing budget,” Hagel said when responding to questions from reporters. “That’s a defining budget because it starts to reset and reshape.”

Hagel announced that the military would be smaller, and more tactical when fighting a war on one front while also maintaining defenses for a second war using specialized capabilities.

“Our analysis showed that this force would be capable of decisively defeating aggression in one major combat theater – as it must be – while also defending the homeland and supporting air and naval forces engaged in another theater against an adversary,” he said.

The plan announced by Hagel was endorsed on Monday by Joint Chiefs of Staff Chairman Gen. Martin Dempsey. He was in attendance at the announcement from the Pentagon alongside Hagel. The budget from Hagel will be proposed next week.

Retired Maj. Gen. James Marks, a CNN Military Analyst, said, “It’s going to be a far slimmer military. This is the toughest part – the political part.”

“Whether it’s smart or not is yet to be seen. But I think it’s necessary to do, given the constraints that we face fiscally within the United States,” he told CNN.

As of right now, the Pentagon budget for the remainder of this fiscal year and for 2015 is $500 billion for each year.

Agricultural Workforce Jobs Report Released in Washington
Let’s Get Social
Feel like getting in touch or staying up to date with our latest news and updates?
Related Posts
Latest In Work Relationships