Home  » 12 Of The Greatest Living Americans, With Purses Of Gold And Hearts To Match, Pose For $126 Billion Forbes Cover 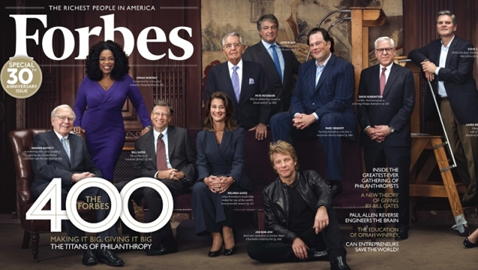 Today magazine are become more glitzy and flashy to garner attention and editors are not known to penny-pinch when it comes to making them as appealing as possible. But what you say about a $126 Billion magazine cover – implausible, would be the first retort. Well, the cover may not have been worth as much, but the net worth in monetary terms of the celebrities featured on the cover was indeed, a cool: $126 billion.

The occasion was the Forbes 400 Summit on Philanthropy, held at the New York Public Library. The event being held for the first-time ever, brought together 161 of the world’s wealthiest people, to deliberate on the world’s most obdurate problems and find ways of fixing them.

Celebrities included such illustrious names as Warren Buffet, Oprah Winfrey, and Melinda Gates. There were keynote speeches with Oprah kicking off proceedings in her inimitable style, followed by inspiring messages from Warren Buffet and Bill Gates.

Jon Bon Jovi spoke about how best fame can be used for doing work for the common good, whilst Melinda Gates, Diane Von Furstenberg and Jacqueline Novogratz discussed issues pertaining to the welfare of women and girls. Marc Benioff and Jim Breyer felt that philanthropic efforts could be made faster and more efficient through technology driven metrics.

Forbes which had pioneered the system of ranking the wealthy according to their net worth felt that instead of merely ranking them, what would it be like if they managed to bring them all together on a common platform. So they invited them and were overjoyed by the assenting response they got from them.

Now that they were there, they lost no time in recording the moment for posterity by getting twelve of them to pose for a once-in-a-life-time portrait. The historic photo destined to grace the cover of the 30th annual Forbes 400 magazine.

During a recess in the proceedings, a dozen of the greatest living Americans, with purses of gold and hearts to match, posed for a group portrait in the Trustees Room at the New York Public Library, to be clicked by photographer Michael Prince.

In this world of digital wizardry where you can Photoshop photographs of Barack Obama shaking Abraham Lincoln by the hand, the magazines vouches that there was no sleight of hand and that all of them were present together in that room, at the same time together.

With the next round of speeches and discussions scheduled a mere half-hour from the photo-shoot, time was a luxury the photographer could ill-afford and the entire photo-session was over in a mere 15 minutes.

However, what none of the celebrities would know is the weeks of preparation that had gone in anticipation of this great moment. Michael Prince had been spending nervous moments checking lights, cameras and shooting the cover over and over again with assistants to ensure that no goof-offs occurred when the legends were there.

Randall Lane of Forbes wrote, “The cover was shot dozens of times in advance using stand-ins to ensure perfect lighting and focus when the actual subjects arrived. When they did, it was  magic, $126 billion of personal net worth, incredible business achievement — and a desire to change the world on a massive scale. It was a moment of business and philanthropic history — and a photo for the ages.”

12 Of The Greatest Living Americans, With Purses Of Gold And Hearts To Match, Pose For $126 Billion Forbes Cover by Harrison Barnes
Tweet Like Plus Pin It Share