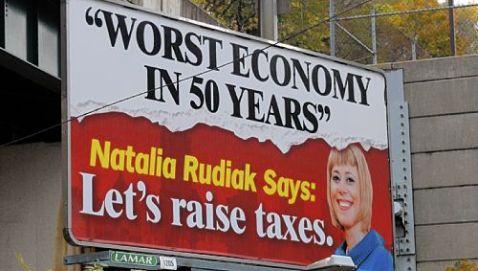 City council members in the Pittsburgh area may have the ability to promote a specific billboard tax but in the meantime, their tax opponent, Lamar Advertising, knows how to make their message loud and clear as well. A number of billboards have started appearing in the area, all of which are criticizing council member Natalia Rudiak and the President of the council, Darlene Harris. These advertisements are now placed in different areas around the city.

One of the billboards clearly says, “Worst Economy in 50 Years. Natalia Rudiak says: Let’s raise taxes.” The billboard is placed on Route 51 in the Overbrook section of the city. The billboard also includes a picture of Rudiak for everyone to see and notice. An attorney representing Lamar Advertising, Jonathan Kamin, said that the billboard company chose to use these tools as a way of informing the general public of what city officials plan to do and how they want to tax advertisers on billboards. Kamin has said, “We think the more awareness there is about the tax, the more people know what’s going on, the better it will be for everybody.”

Darlene Harris has already made estimates on the tax, believing that it could help the city to generate around $2 million up to $4 million in revenue per year. She believes that it is something that needs to be done so that the city can earn more revenue for necessities, such as new police cars in the area. In the meantime, Kamin would not comment on the number of billboards that have been placed throughout the city or how many of these billboards are expected to be posted up in the next few weeks. He did say that Lamar is producing a number of different messages and that some of these messages will be placed on electronic billboards as well.

Rudiak has said, “I feel like I hit the big time.” She also said, “If they’re trying to intimidate me, they’re barking up the wrong tree, I’m no spring chicken.” Some of Lamar’s messages are aimed toward criticizing Mrs. Harris as well. There are billboards that feature a picture of her as well, instead of just Rudiak. A separate billboard basically makes fun of her tax plan, noting that a number of her efforts have gone unsuccessful and also speaking of how she has looked to tax tuition for college students. In her defense, Mrs. Harris said, “I look for money anywhere and everywhere, except from the residents. I think the residents pay enough.”