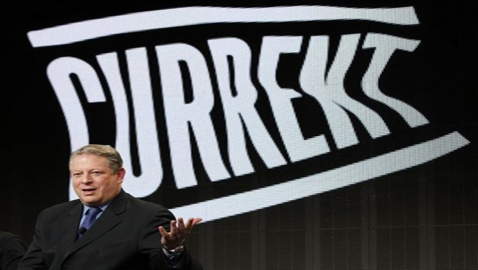 Current TV cannot face the heat anymore and the cable network’s falling ratings and constantly being in the news for the wrong reasons has found its owners putting it up for sale.

The network founded by former Vice-President Al Gore and its current CEO Joel Hyatt, is yet to make a formal announcement regarding their decision to sell it, but is reportedly in discussion with investment banks after some media companies evinced interested in acquiring it.

Hyatt said, ‘This year alone, we have had three inquiries. As a consequence, we thought it might be useful to engage expertise to help us evaluate our strategic options.’

The network was launched in 2005, targeting young viewers, primarily with political content pertaining to their taste. However, it failed to assert itself or resurrect its plummeting rankings.

It has been in the headlines for its swift turnover of staff, including hiring former Countdown host, Keith Olbermann, in January 2011 before unceremoniously dropping him in March this year. This led to messy legal complications with Olbermann taking the network to court, alleging payments due and sloppy and inferior production values.

Refuting all claims by Olbermann, the network wrote an open letter to its viewers clarifying their stance over the Olbermann issue. It said that the network was ‘founded on the values of respect, openness, collegiality, and loyalty to our viewers. Unfortunately these values are no longer reflected in our relationship with Keith Olbermann and we have ended it.’

Olbermann rejoined with a terse statement that the courts would answer the networks claim of his accusations being untrue. He went on to say that Current still needed to pay him dues of $70 million and said that the company had technical issues that included substandard equipment that impeded quality production.

He further claims in his lawsuit that Current co-founder Joel Hyatt and network President David Borman were the cause of the problems that his show was beset with. He said that he averaged 177,000 viewers each night, whereas his successor Eliot Spitzer could manage only 47,000 viewers.

In spite of its internal bickering, Current reaches almost 60 million homes, which new buyers could use to positively impact their bottom lines. Moreover, its earnings from its subscribers at 12 cents each, was around $82 million last year. It also raked in $1.9 million in advertisement revenue. In the right hands it could indeed become a cost-effective and lucrative proposition.

It was also rumored that it was looking around for collaboration with a larger media partner and fresh funding. Its current carriage to around 60 million households is only a percentage of its immense potential and new realignments could stave-off the sale process and allow it to take off in an upwards direction.

Which option both Gore and Hyatt will choose is uncertain for the moment, but given that they have been in the business for almost seven years now and cable television is increasing in popularity, the right connections could breathe in new life to the network.

However, if an enticing, hard-to-refuse, offer were to come along they’d probably be inclined to let go off a well-intentioned initiative that gave more pain than happiness during its tenure.