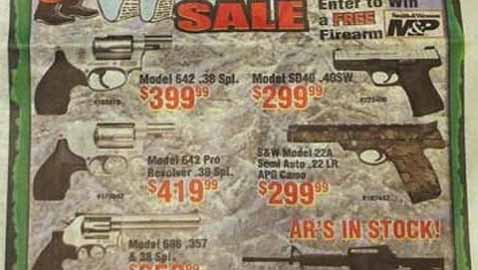 The Herald, a South Carolina newspaper, is facing ridicule and scorn and a barrage of Twitter messages, after it, rather stupidly, allowed a huge three-quarter page advertisement, touting its gun sale offering Christmas discounts on Smith & Wesson assault guns, replete with an image of a laughing Santa Claus, to be placed next to a story of the horrendous school shooting.

The advertisement for a pre-Christmas sale of a variety of weapons, that included handguns and assault rifles, at Nichols Store occupied prominent place on the fifth page of The Herald of Rock Hill, making it hard to accept the editor’ s contention that it was unintentional and unplanned.

Coming on the heels of such a horrific massacre, one of the worst in US history, and committed with weapons similar to the ones it was advocating buying, a grieving nation would have been in no mood to forgive and would have given it the censure it would deserve, even it was placed elsewhere.

But what made it even worse for the company was that the ad was placed next to the coverage of the Connecticut school shooting and a picture of fleeing kids and one of the tearful President, emotionally moved and deeply hurt by what had happened.

The newspaper was quick to issue an unconditional apology, saying that it was unfortunate that the ad appeared where it appeared. Its editor Paul Osmundson said that since many editors work on the newspapers content, the regrettable concurrence of the shooting and the advertisement, somehow escaped their notice.

He went on to say, that all of them are accountable, as it was a dim-witted mistake and should have been taken care of and went on to offer a categorical request for forgiveness on behalf of all involved. He added that the newspaper would maintain its commitment to society and be reflective of the views and feelings of its readers.

Nichols Store, that had placed the ad the newspaper were also quick to respond and issued a statement saying that the ad had been sent days before the tragic shooting took place, moreover, they had no idea or where their ad would be printed, adding that their thoughts and prayers go out to all those impacted by the immense tragedy.

However, the ad has caused considerable pain and outrage and viewers are showing no mercy. Sandi McCann a local resident said that when she saw the ad, she felt nauseated and sick. Obviously the person in charge was not using his head, she opined.

Rob Laney, another resident, working in advertising, agreed that at times ads did get placed wrongly, but said that did not absolve the editors from their awful mistake – the ad, according to him, was extremely uncaring and insensitive.

A contrite and apologetic Darren Nichols, owner of the store, said the moment he received information regarding the ad from customers and from comments on the store’s Facebook page,  he was horrified and confronted the newspaper with what they had done. He repeated that neither he, nor his store had anything to do with how this ad should appear.  He said that if he could have withdrawn his ad, he would most certainly have done so.

There are many newspapers in the US, that, as matter of principle and business policies do not carry classified ads for gun sales, inspite of being roundly berated by the gun-lobby and gun-owners. Irate individuals asked them not to carry ads for cars as well, as more people die in vehicle accidents than are killed by guns.

The statement, such conscientious newspapers make is significant, even though it costs them a lot of money – the Seattle Times says that it loses as much as $400,000 in advertising revenue for refusing to carry ads for gun-sales.